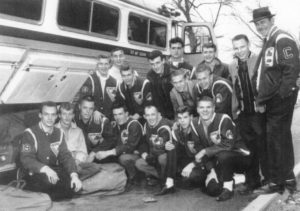 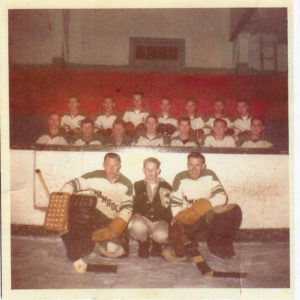 When the Hespeler Junior C Shamrocks were presented with the Clarence Schmalz Cup at the conclusion ofthe 1964 hockey season, they had achieved all they had set out to do from the start -, namely, win the Ontario championship.

They were all smiles as they set out for Lindsay that year to play the final game ofthe series. They had beaten arch-rival Preston and then Wallaceburg to reach the finals against Lindsay.

They earned the laurels by defeating the Lindsay Lions 4-3 in the fifth game ofthe best-of-seven championship series. The only thing that could have been better was ifthey had won it on horne ice. But their previous game on horne ice was memorable. Ed Tucker scored the winning goal with only 80 seconds left in the third. Teammate Torn Graham got the insurance goal with 30 seconds remaining. Goaltender Gord Becker played a stellar game to keep the Lions off the scoreboard after their first goal.

In the next game, back in Lindsay, Hespeler scored two goals late in the third period to earn the victory, and the title. It was Hespeler’s second provincial title of the year – the bantams won the Bantam B title the preceding week.

Captain Dave Tucker scored the first goal for the Shamrocks, and after Lindsay replied, Tucker scored the go-ahead marker again, in the second period. But a couple of goals by Lindsay gave them the lead before Marvin Main tied the game and Bob Kitzman, who wasn’t even supposed to be playing due to an injury, got the winner. Again Becker was outstanding between the pipes.

Hespeler edged Simcoe near the end ofthe season to finish first in the regular season standings. For coach Stan Stoddart, it was a nice feeling to capture the provincial title, 13 years after he had played on the last Hespeler team to win a provincial title (1951) when Hespeler had earned the Jr. D trophy. Ed Butler said their late coach Stoddart was the Iynchpin to the team’s success. In addition to Stoddart, both Doug From and and Neil Walker have since passed away.

“Stan worked the hell out of us,” said Butler. “He was the motivator. He got the maximum out of us. We had some good hockey players, dont get me wrong, but he kept us on the straight and narrow.”

When the final buzzer sounded that long-ago Monday night in Lindsay, bed-lam broke out as Shamrock well-wishers poured onto the ice. Long minutes of handshaking and back-slapping followed, before CAHA executive member Jim Crombie presented the championship trophy to Captain Tucker. Minutes later, in the dressing room, coach Stoddart and executive members were thrown into the showers in the dressing room.

It was late April, and they didn’t mind their April showers. Spring had arrived. When the long bus ride home was over and the Shamrocks arrived back in Hespeler, the team was met on the outskirts of town by one of the town fire-trucks and then wheeled up and down the streets before heading to the arena where the victory celebration continued until the wee hours of the morning.