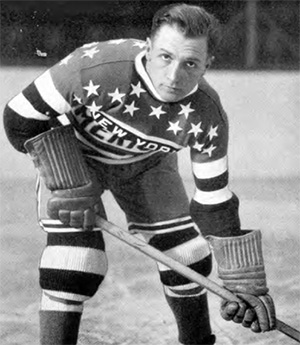 When former NHLer Allan Murray came to Galt to coach the Junior A Galt Kist Canadians, he had only been in the coaching business for three years, yet already he was regarded as one of the outstanding coaches in junior hockey.

He knew hockey. Murray, a defenseman, grew up just outside Stratford, played his junior hockey in Stratford long before it became the Festival City, and then went north to play for South Porcupine in the NOHA.

A week after his death in 1982, the dean of Canadian sportswriters remembered Murray in a Toronto Star column (January 12, 1982), calling him the “Little Iron Man.” “Few hockey followers of today,” wrote Dunnell, “would recall the shattering body

jolts handed out by the little Allan Murray, who played for the old New York Americans.”

But long before he suited up with the Amerks, Buffalo Bisons of the IHL recognized Murray’s talent and signed him to his first professional contract. He played five seasons there before moving to Syracuse.

That’s when the NHL’s New York Americans came call- ing. Murray starred on the blueline for the Americans from 1932 until 1940.

While in New York he cemented a life-long friendship with his teammate, Galt’s Normie Himes.

When his playing days were done, he retired to his native Ontario, working briefly in Kitchener with the Blue Top Brewing Company before Tiny McFadden, president of Galt Malleable Iron (later to be president of the OHL), and Alf Collier of Mammy’s Bread (located on Concession Street part way up the hill), approached Al to help start a Junior A hockey program in Galt. That

team, with Murray as coach and GM, began in 1943.
Then the Kist Canadians, sponsored by Kist Beverages of Stratford, started up, and

for the next few years, first with the Canadians and then with the Galt Junior Red Wings, Murray developed some of the best young hockey players in the world, including Marty Pavelich, Leff Fogolin, Pete Babando and Gordie Howe.

Howe, who practiced with the Galt Jr. Red Wings and played exhibitions but was unable to play league games due to an import rule, said Murray figured prominently in his develop- ment. “I didn’t miss that much because the learning experience I got through the constant teaching of Al Murray helped me a great deal.”

Murray, who took coaching personally and counted all his players as “sons,” greeted the young Howe at the train station and got him settled in with his billet family. He did the same thing with Pavelich.

“He was very firm as a coach,” said Pavelich of Murray, “but very fair. He demanded loyalty and demanded that you give to the best of your ability.”

It was largely through Murray’s efforts that Junior A hockey came to Galt. Today, when Howe and others think back on those years, they think first of Al Murray, and trainer Toots Last.

The Galt Jr. Red Wings were one of the top teams in
Canada during the period Murray was at the helm, and there were some terrific rival- ries with some of the other teams, especially the Guelph Biltmore Madhatters and St. Michael’s Majors.

Murray, who owned the Albion Hotel when he was in Galt, either played with, coached, or came to know some of the great men of hockey. He counted Eddie Shore as one of his friends. Shore, in fact, used to bring the Springfield squad to Stratford for training camp.

But one of his best friends was Normie Himes. “Ruth and Normie and my father and mother (Nora), were great friends,” said Al’s son Bruce.

The Americans, Normie and Al included, would play all their home games at Madison Square Garden. In the summers Murray would return to Stratford and his cottage in northern Ontario to recuperate.

Murray was livid. He saw Adams parading up and down, giving the Galt players hell. He told Adams, his boss, that he wasn’t to be in the dressing room with his players.

Shortly after, Adams sent the Galt executive a note telling them to get rid of Murray.

Murray then moved to San Francisco with his family to coach the San Francisco Shamrocks of the Pacific Coast Hockey League. There, he and his players were involved in a terrible train crash with an oil tanker that had stalled on the tracks. Murray’s hands were burned trying to beat fires off people. Several players were heroes, rescuing other passengers.

Murray, who was also an excellent golfer like his friend Normie Himes, coached briefly with Eddie Shore in Springfield, and returned to Galt to help coach the Jr. A Black Hawks when they were in need of a coach.

“Pound for pound,” wrote Dunnell, “Murray rattled more ribs than any other rear- guard, and that was in a hockey age when defence players were rated on the bruises they inflicted, rather than on their assists in the scoring statistics.”

Said Harold Cotton, a former opponent and teammate: “For his size and weight, he was the toughest defenseman I ever saw play.”