Hers was a short-lived career, but despite its brevity, the talented athlete produced some outstanding results.

Klager honed her water skiing skills on nearby Puslinch Lake, a summertime haven for generations of youth from Galt, Preston and Hespeler.

The city of Cambridge has produced a large number of champion water skiers, but one of the first to emerge from the Puslinch Lake Water Ski Club was Higgs.

She was the top female water skier in Canada in 1969- 70, winning the coveted Canadian Championship.

Water skiing is divided into three categories — jump, slalom and tricks. In jumping, the skier rides over a ramp, with the distance travelled from the top of the ramp to the water recorded.

In slalom skiing the skier negotiates six buoys in a standard course with boat speed and rope length variances. The total number of consecutive buoys is scored. 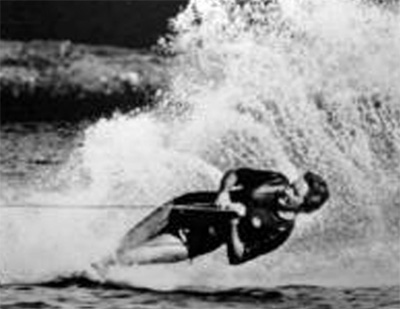 Trick skiing is the performance of various figures or tricks on one or two skis within two twenty-second runs.

Higgs’ first entry at the national level — the first Canada Summer Games in 1969 at Halifax — saw her win gold medals in slalom and tricks and earn a silver in jump. It was an impressive showing by the Hespeler girl.

Following the Games she won the overall Canadian Women’s Championship; one week later she tricked a record 3,006 points at Morrisburg, Ontario.

In August of 1970, Higgs won her second overall Canadian Women’s Championship, and shortly afterwards, she represented Canada at the North and South American Group I Championships in Mexico and won a silver medal in tricks.

Her success would be short-lived. Higgs, just entering her prime, was forced to retire in August 1971 after suffering an injury during training at Puslinch Lake for the World Team Trials and the Nationals.

The career-ending injuries included some severely pulled shoulder muscles, ligaments and tendons, forcing her to call it quits on a brief but stellar career.