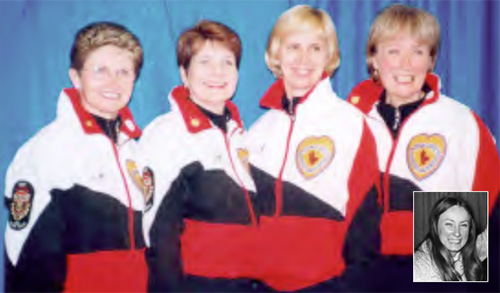 Coming off a year in which Anne Dunn and her rink of senior curlers from Cambridge, Ont., captured the World Seniors Curling Championships, they proved their mettle by winning the Ontario Scott Tournament of Hearts title at Mississauga’s Hershey Centre in the winter of 2003. Her victory shocked most of the province, as she beat Anne Merklinger and Darcie Simpson in the playoffs.

That victory propelled Dunn, who had been curling for more than 35 years, and her rink to the prestigious Scott Tournament of Hearts, which is every female curler’s dream.

To qualify, Dunn captured the provincial title on a Saturday night in February, 2003, with a 5-2 victory over Simpson’s Ottawa rink.

Dunn, the reigning senior women’s world champion that year, rebounded from near disaster in the eighth end when she made two pivotal shots and scored one point when it appeared as though she might give up three. It was vintage Dunn.

“A lot of good things happened here for us and I’m proud of the way we played,” said Dunn, a real estate law clerk who guided her rink to second place in the round-robin por- tion of the competition with a record of seven wins against only two losses. 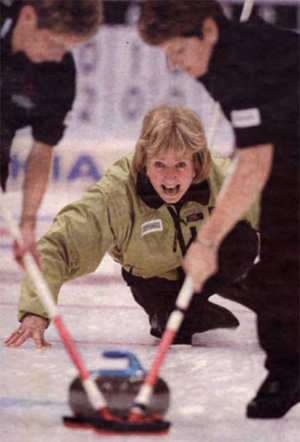 And stay positive they do, and have done, for the past few years. Indeed, it is this positive attitude, coupled with exceptional skill, that has lifted them to the very heights of their sport. Positive thinking certainly got the Dunn rink through the eighth end in the provincial title match when third Lindy Marchuk missed back-to-back take-out shots.

“I made a strategical error there,” said Dunn. “I should have cleared the front guard instead of calling for her (Marchuk) to take out the one at the back of the house.”

But they persevered, even though Simpson, who lost in the provincial final for the third time since 2000, immediately pounced on the mistakes and had three stones counting. That’s when Dunn rebounded with a take-out on her first shot and then her second shot hit a Simpson rock in the four-foot circle, tapping it back and staying to count one and grab a 4-2 lead.

“Those were two nice shots she (Dunn) made,” said Simpson. “I thought we might be able to steal one, but Anne made a good run-back with her first shot and the tap-back with her second shot was really nice.”

After surviving the eighth end, Dunn stole a point in the ninth when Simpson was heavy with a draw attempt to the four-foot circle. In the 10th end, Dunn kept making take-outs until she ran Simpson out of rocks. Simpson lost the 2000 provincial finals to Anne Merklinger, also of the Rideau club, and last year she was beaten in the final by Sherry Middaugh of Midland.

The 55-year-old Dunn and her rink of Marchuk, 53, second Gloria Campbell, 60, and lead Fran Todd, 57, advanced to the final by beating Merklinger 7-6 in a playoff game.

After winning the previous two national seniors titles and adding a world title to their resume, Anne Dunn and her 50-somethings team from the Galt Country Club were enthused about the provincials in 2003.

“It’s exciting and it’s something we’ve always dreamed of,” Dunn said after beating the previously unbeaten Anne Merklinger rink from Ottawa 7-6 at the Hershey Centre in a battle of the top two teams from the round-robin. 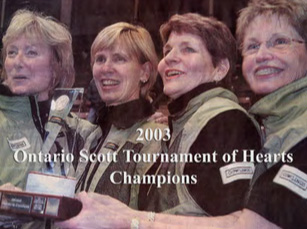 “The first year we won the seniors was amazing and I was so excited after that,” Dunn said. The Dunn foursome, which has been together for three years, qualified for this tournament after failing to make it back to the senior national. They quickly became the sentimental favourites, wrote Perry Lefko of the Toronto Sun.

“The support has been just amazing,” said Dunn. We’ve been around a long time. We feel confident.”

“Imagine, I’m going back to play in the Scott,” said Todd, a 37-year veteran of the Dixie Curling Club. “It’s a great, great feeling, really unbelievable. The last time I played in the Scott was 14 years ago.”

The Mississauga News called them the Golden Girls of curling, since Lindy Marchuk, at 53, was the youngest on the team.

No matter. Said Dunn: “We really believe in ourselves. We believe in what we need to do to win. I know that I don’t think of myself as a senior.”

The highlight for the Dunn quartet? Winning their round-robin game against Team Canada and being 5 and 2 after 7 draws.

But that is where their luck turned. They failed to win another game. Still, they had accomplished more than anyone thought they would. The Golden Girls had made it to the top.

Said Dunn: “I would rate this year just as high as last year because no other Senior Ladies Curling Championship team from the previous year has gone on to compete at the Scott Tournament of Hearts the next year.  However, winning the World Championships last year was unbelievable.”