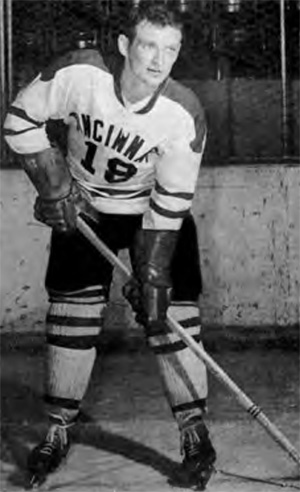 When people talk of the great athletes to emerge from Cambridge, they usually men- tion Galt’s Bill ‘Wiggie’ Wylie.

But for all his athletic prowess – baseball and hockey were his two big sports, and between them, he was best at hockey – the first major championship he won didn’t come until 1961 when he helped the Galt Terriers win the Allan Cup. He coached the Galt Hornets to the Allan Cup in 1971.

In his playing days he could only be called a winner. He was a truly memorable player, wrote British Columbia sportswriter Al Hooper.

“The things you remember best about William Vance (Wiggie) Wylie, if you saw him at all in his five-year Western Hockey League stint with the Vancouver Canucks, were his courage and his size.”

Still, there were some who thought that had he been a few inches taller, and heavier, he would have stuck with an NHL club with little problem.

Wylie was born and raised in Galt, living in a wooden house beside the Holy Bridge on Grand Avenue. He played ball with the Terrier Pups junior squad, and junior hockey with the Galt Red Wings.

There is almost no doubt that had he been bigger, he would have played in the NHL. Several contemporaries, like Butch Martin and

Neil Armstrong, believe that had Wylie come along 25 or 30 years later, “he would have been a cinch to play in the NHL.”

Hooper noted that whenever a small man succeeds in hockey, “such odious phrases as ‘best little man,’ and ‘pound for pound,’” often spring up. But Wylie wanted none of it. He went into the corners with the best of them.

What he lacked in size he more than made up for in finesse and skill. In a battle of wits, wrote Hooper, he made many opponents seem half-armed. Rarely would anyone be able to hit him squarely, though they often hit him after the play was dead. Seldom were they clean checks.

His passing touch and forechecking sense were his trademarks. But in seven professional seasons, it was rare that he would play a full season without injury. The closest he came was in 1951-52 when he missed only two games of the American League season with Cincinnati. That season he scored 21 goals and chalked up 53 points.

At the end of his professional career, he was still performing heroics for the Canucks. More than once he almost single-handedly won games with his playmaking ability and penalty-killing.

In two notable games against western Canada opponents Calgary and Edmonton, Wylie had eight assists to lead the Canucks to wins.

Wylie was fearless. Hal Laycoe, then New Westminster managercoach, saw Wylie have his best professional season (18 goals, 52 assists for 70 points), and then call it quits the following year. “Last year,” said Laycoe, “a lot of the Canucks were timid around our Pete Durham. I’m not saying I blame them – Pete scared a lot of people. But there was one guy on that Vancouver club who wasn’t scared at all. Ever. And that was Wylie.”

After the Wylie-coached Hornets won the Allan Cup in 1971 they toured Europe, representing Canada at the Ahearn Cup in Stockholm. There they played against some of the best amateur teams in the world. Many of the players remember Wylie giving them hell after they were down 5-0 to Moscow Spartak. Months later, during the Canada-Russia hockey summit, many of the same Russian players were besting our top NHLers.

Despite Wylie’s strong desire to win, former player Peter Speyer noted, “he would never do anything beyond the rules to win.”

Don Rope played alongside Wylie with the KW Dutchmen. “He was a great centre- man for us in those years,” said Rope. “He could always set up the play and make that perfect pass.Wingers appreciate that. When cutting in on goal the puck would be right on your stick.”

Friends, like Peter Gzowski to Gordie Howe, remember his skating, his playmaking, his heart. Neither of them can visit the city without thinking of Wylie.

The end to a memorable life came quickly. While winning the club golf championship at the end of August, 1983, he was hindered by back pain. Soon he was undergoing surgery to remove cancer. He chose to go home from hospital that fall. It was a tough struggle for the little man with the big heart. He died at home on November 24 and was buried at Mountview Cemetery, on a hill, with a plain, black headstone marking his resting place.

“Wig left quite a mark on the community,” said longtime friend Jack Scott.