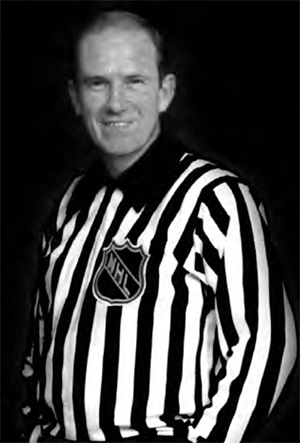 When 53-year-old Bob Hodges retired as an NHL linesman after 25 seasons, he had amassed quite a resume. It included 1701 regular season games, 157 playoff games, three All-Star Games and three Stanley Cup finals.

Not bad for a guy who didn’t get his start as an NHL official until the relatively late age of 28.

Indeed, just before he was hired, he implored NHL referee-in-chief Scotty Morrison to “take a chance on me.” Morrison did. For the next 25 seasons Hodges had to prove himself game in and game out.

Although he was born at the Galt Hospital, he grew up in Hespeler and began skating on double runners at age three on the Speed River and in the backyard. His father, Ted, always had a rink out back.

He began his hockey career as a defenseman, before moving to goal. Along the way he played for two Ontario championship teams, including the Hespeler 1963-64 juveniles and the Jr. C Shamrocks in the mid-1960s.

“We had some good hockey teams in this town,” he notes.

He impressed more than a few even at a young age. “I got a letter from the Detroit Red Wing organization, while still a juvenile. They wanted me to play goal in Goderich.”

But Hodges told them he didn’t want a job, that he wanted to finish high school. He never heard from them again.

Not long after, with Jake Weins and his wife Gail offering encouragement, he paid his dues refereeing minor hockey games.

“They were the small guys,” explained Hodges. “You’d pick them up and set them in the right direction.” 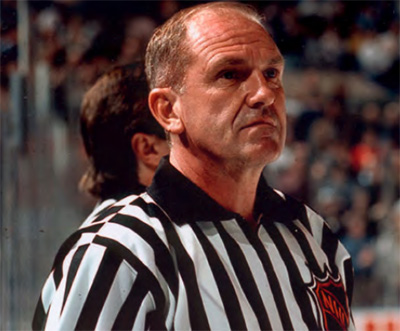 Hodges soon acquired his OMHA card, working the Hespeler Minor Hockey Olympics, and other games. “I remember when Gretzky played in this tournament, scoring all those goals.” Little did he know the two would cross paths frequently in the years ahead.

Hodges laughed. “It’s nothing but a clique,” he said. But two weeks later he was working a playoff game. He never looked back, spending two years in the OHA and working the AHL on weekends (1970-71).

“That’s when Frank Udvari saw me,” said Hodges. Udvari was the AHL’s supervisor of officials. The workload of covering two leagues (OHA and AHL) and working a regular work week at a local machine shop, was trying. “It was tough,” said Hodges. Finally he phoned Udvari at his Kitchener home.

“I need a job,” he said, explaining that he thought he was good enough to work the NHL. Udvari talked to the NHL’s supervisor of officials – Scotty Morrison – and he was invited to training camp in Etobicoke. “At the end of two weeks, Morrison offered me a contract.”

When he got to the NHL he saw some talented players like Dean Prentice and Stan Mikita. It was intimidating. He worked his first NHL game
October 14, 1972, when the Pittsburgh Penguins played the California Golden Seals.

“I was scared to death when I stepped on the ice,” Hodges said. His biggest fear? The fear of making a mistake plagued him his whole career, but as he sees it, “If you don’t have butterflies, then something’s wrong.”

He had the requisite number of injuries over the years, including a serious tendon cut on the back of his hand in Boston. For three days he stayed in the same room at Boston General that Bobby Orr stayed in when undergoing a knee operation.

Despite the constant travel to the next game, life went on for the Hodges family back home in Hespeler. Wife Gail – “my mainstay,” – raised the couple’s two children in the winters. Michelle was born in 1970, and Shawn followed in 1972.

Hodges’ only regret? “Family life suffers,” he said. “You miss a lot.”

But he also made a lot of friends over the years and today ranks as one of the longest-serving linesmen in NHL history.