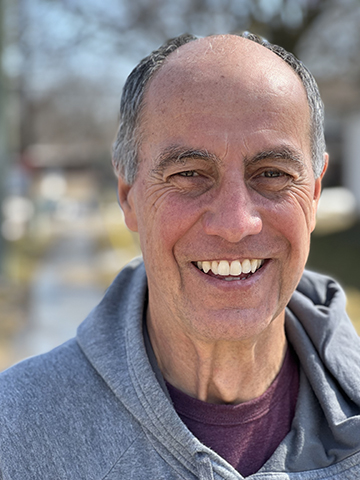 Growing up in Windsor, Ontario, Bob Howison attended Walkerville Collegiate where he played football and basketball, as well as track and field.

“I didn’t play many sports when I was younger,” he recalls, but it was in senior public and high school when he began a lifelong attachment to sport. It’s been a part of his life ever since.

After graduating from high school in 1972, Howison went to the University of Western Ontario to take science, in preparation for entering Western’s dentistry school.

“I always wanted to be a dentist from at least Grade 9. I have no idea why, but from that day forward, that’s what I wanted to do.”

He enjoyed his years at Western. In high school he was selected to attend the Athletic Leadership Camp at Lake Couchiching, and he made many friends, one of whom—an Oshawa native named George—he chanced upon at the start of a physics class during his freshman year at Western.

That chance encounter nurtured what has become a lifelong friendship. It also set the stage for his participation in basketball, which has lasted decades. The two began playing intramural basketball, as well as with the London city league and even at lunchtime pickup games in the UCC. They had lots of fun and along the way, won several intramural championships. “We view ourselves as sort of legendary now,” he says. The team was called the Bnorks.

The entire group is still closeknit, getting together a few times a year to play golf and watch NCAA basketball.

After two years at Western, Howison was accepted into dentistry, graduating in 1978. “It was tough, but I liked it all, and I never had any regrets.”

It was chance that brought him to Cambridge. Dentistry offered him the opportunity to be self-employed, and after seeing Kitchener a few times during Oktoberfest, he had a desire to return to the area. It was not too distant from his family cottage, but he heard that the local dentistry market was crowded.

“At that time dental sales reps would take you around to various places and in turn, you bought your equipment from them.”

And so, in  the fall of 1977, Howison’s final year, Ken Croney took Bob under his wing for a few visits. He was legendary in the dental field and seemingly knew everyone. “He brought me down to Galt and we visited Dave Ridsdale and Gary Ramsey. And it happened that the dental building on George Street had an opening.

Local dentists were very welcoming, and he liked what he saw, including the old architecture. He opened his practice in the summer of 1978. He also contacted Len Bates to find out about local basketball programs. That led to playing with Mike Kilpatrick and in 1979 he played and coached Can-Amera for the first time.

“Through that I met Jim Baird, and when Jim began Cambridge Basketball, I helped with that.” That led to becoming a convenor for basketball at Can-Amera, and then he became a sport coordinator, and eventually became the first non-Rotarian chair of Can-Amera. The Games owe their origins largely to Rotary and the City of Galt. Howison remained with the Can-Amera committee until the Games ended in 2006 after 35 years.

“I thought Can-Amera was wonderful. I hadn’t been exposed to anything like that in Windsor, so it was a whole new experience. And from a basketball point of view, it was a perfect opportunity for kids and their parents to have a summertime activity—it was only $15 and you got a shirt out of it and a trip to Saginaw—and you met other kids and practised twice a week. It was a great acivity and very affordable. At the organizing level it was a lot of fun. The Cambridge committee always got along. We all knew each other. If there was a problem in a sport area, there was a person the committee knew they could talk to.”

The beauty for Howison, as it was for many, was that Can-Amera not only introduced him to American counterparts, but also to others in Cambridge and in Saginaw that he likely would never have met.

The surprising thing about Can-Amera, said Howison, was that he figured Cambridge would never be competitive with athletes in the U.S. “Growing up in Windsor, I thought the States had way better athletes than we had.”

He admits he was very wrong. But what he also saw was that weaknesses in some sports, on either side of the border, were quickly offset by the international competition. Track and field became stronger in Cambridge, for instance, and soccer became stronger in Saginaw Townships.

“I think Can-Amera helped develop minor sports, like basketball, partly because it was able to run more year round.”

Given recent political developments in the U.S. with the growing political divide, Howison has thought more than once that these times could benefit from a goodwill style of games like Can-Amera.

Howison served two terms as Can-Amera chair, but maintains it didn’t matter who was chair because “Can-Amera was such a well-run machine it could have run itself.”

In 1990 Howison moved his dental office to The Mall at the top of Main Street, where he remained for the next 25 years, before moving one final time to Ainslie Street.

As Howison became further involved in the community, and as his practice grew, he also joined the YMCA board, another offshoot from his Can-Amera connections with John Hinde and Dave Carse. His time with the YMCA board coincided with a marked increase in membership and the fitness boom. Before joining the board, he got involved in a committee that was looking to move the Y from its Queen’s Square location, where it had been since 1914, to a new location on Hespeler Road. He was enlisted to chair the fundraising committee, and was joined by other capable people like Tom Watson. “Tom was great,” said Howison. “A very big help.”

Howison’s time in Cambridge, which has now been the better part of his life, has been punctuated by gratitude and, he never fails to note, luck. “I always felt I was very lucky to be surrounded by great people who were very helpful and were a great asset. He mentions people like Lynn Woeller, Frank Leblanc, Dave Young, Dave Carse and Jim Harding as being a few of those people. There were many more who surrounded him along the way.

Once he had children, they became involved in local sport, but they also got enlisted in many of their father’s activities. Eventually Howison became president of Cambridge Basketball. Years later, when his daughter went away to university, she remarked: “Y’know dad, I was at this event and I was thinking afterwards when I got up and left that it was probably the first time in my life when I’ve been at something and I didn’t have to fold up tables and chairs.”

Much of Howison’s contributions to Can-Amera, the Y and to Cambridge Basketball, among other things, came in the evenings, but not always.

“Being married to Janice made it very easy because she worked in the office and people knew that if they were talking to Janice it was the same as talking to me.”

Howison retired in 2019, 41 years after opening his practice in Cambridge. But long before that, he got involved with the Cambridge Sports Hall of Fame and is the current vice-chair. He also became involved in affordable housing. All his activities have provided him the opportunity to meet people.

“I loved meeting and interacting with people as a dentist. People would come in and they’d have areas of expertise that I knew nothing about, and so if you get them talking about something they know, I learn something from it. I got exposed to all kinds of things—for instance, companies in town that made stuff I didn’t know about.”

Howison opened his practice June 1, 1978, and counts himself lucky for all that has happened in the years since. Residents of Cambridge didn’t know what they were getting on that June day, but that day was also a lucky day for the city.