Cambridge Team of the Year 1984 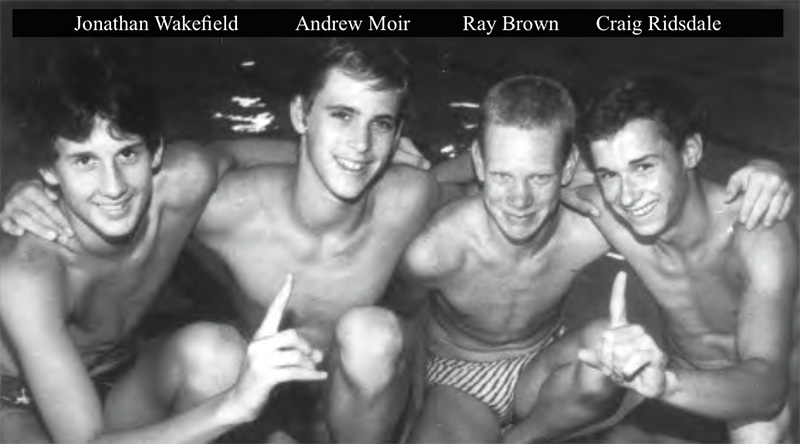 Relay teams, by their nature, are somewhat ephemeral. The team is subject to change frequently when new swimmers come along with better times.

But in 1984 the Cambridge Aquajets relay team of Ray Brown, Andrew Moir, Craig Ridsdale and Jonathan Wakefield, came together for a magical year in which they swam to several Canadian records.

The 4×100-metre relay national champions broke three Canadian records, two of which would last for years, during their incredible year.

The team was coached by Aquajets head coach John Campbell, and Anthony Streppel.

The team comprised 14-year-olds Ray Brown doing the breaststroke, Andrew Moir in the butterfly, Craig Ridsdale in the freestyle, and Jonathan Wakefield in the backstroke.

It was a winning combination and proved unbeatable in both short course and long course.

“John Campbell was a phenomenal coach,” said Ridsdale. “He spent a lot of time with us and turned us into a co- hesive unit. He really trained us well.”

The foursome was recognized in the fall of 1985 at the Cambridge Sports Awards when they were presented with the Cambridge Team of the Year award.

“It was a great year,” he said. But as good as the team was, nothing lasts forever. Not long after coach Campbell accepted a coaching position in Regina, Ridsdale and Wakefield left the club, and the team was no more.

Campbell would go on to coach in Victoria, while the relay swimmers would pursue their own objectives, either in the pool or outside of the sport.

Brown moved to the Region of Waterloo swim club, eventually earning a scholarship to the University of Tennessee and competing for Canada at the 1992 Barcelona Olympics.