The Cambridge Belles (17 and under) capped off a remarkable year when they won the Canadian A ringette title in Kitchener in the spring of 1987.

It was no easy feat. In the championship game against Manitoba, Cambridge scored three times in the final four minutes to earn a 7-4 victory and the national title.

The win cconcluded a week of play which saw the Ontario champions go 7-1, losing just once in overtime (8-7) to the eventual bronze medalists from Quebec.

Cambridge finished up the round robin portion of the tournament with a 12-11 overtime win over wildcard champion British Columbia to finish
first in the medal round. Debbie Hornsby scored the winning goal 50 seconds into the extra period. It was her sixth goal of the game. She also managed three assists. Kim Blakely was just as impressive offensively, scoring twice and adding five assists. 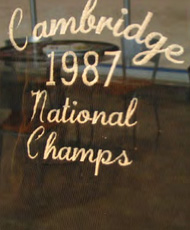 That gave Cambridge an automatic bye into the gold-medal game.

There they fell behind Manitoba early before battling back. Blakely got the game-winner on a setup from team captain Lisa Devison. All told she scored three goals and added three assists, while Devison wasn’t far behind with two goals and three assists.

Hornsby scored a goal and had two assists, while Laurel Castellan had a single goal.

Three Cambridge players – Hornsby at forward, Devison at centre and Lisa Adams on defence – were selected to the tournament all-star team.

Another Cambridge native, Julie Hornsby, who attended the University of Toronto and played for Etobicoke, was also selected to the Deb (18 and over) all-star team as a forward.