The Cambridge Ringette Turbos were the dominant force in the world from 2007 to 2009.

In the 2007-2008 season they lost only four games and were top-ranked for most of the year.

That season Jennifer Wakefield was named the National Ringette League’s (NRL) most valuable player and the team, coached by Cambridge’s Glen Gaudet, won their second national championship in the previous three years in St. Albert, Alberta. Vanessa Cowlen was named to the tournament All-Star team.

They won the World Club Championships that year in Sault Ste. Marie. 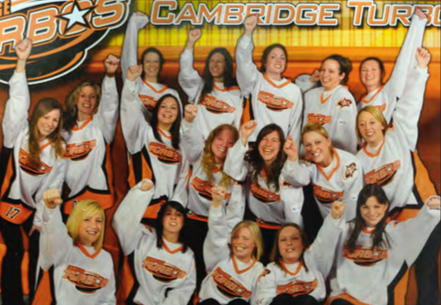 The squad was also named Cambridge’s George Hill Team of the Year winner at the Cambridge Sports Awards.

The Turbos followed up the next season with not only the Ontario Championship, but also the Eastern Conference, the Canadian champi- onships and then, to cap it all off, they became World Club Champions at the first-ever world club championships.

At the Worlds they played against three other NRL teams and two Finnish Elite League teams.

The Turbos also won the NRL championship that season, winning the title at the NRL Championships in Charlottetown, PEI.

They enjpoyed a remarkable regular season with a record of 28-2-1 (won- lost-tied), scoring 342 goals for, with just 63 against.

In the World Club final they beat Luvian Kiekko 6-3 to win the first-ever World Club title in ringette history.

Their Canadian competition put up a good fight but the Turbos were almost unbeatable that season. They defeated the Montreal Mission to capture the Eastern Canadian Championship, and

then won the Canadian title by beating the Edmonton WAM 4-1 in PEI.

During the regular season Sharolyn Wouters led all players with 98 goals and 57 assists in just 27 games. Wouters again stood out at the Canadians, tying Jennifer Wakefield for the scoring lead with 23 points in seven games.