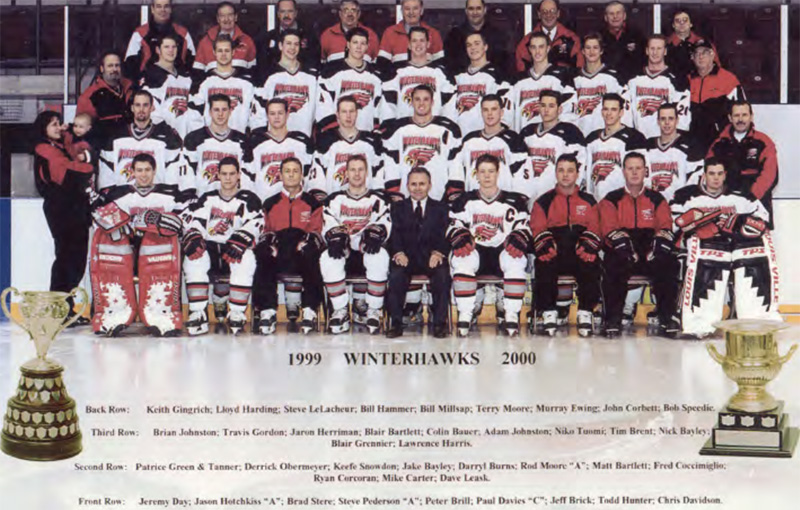 When the Cambridge Winter Hawks advanced to the all-Ontario Sutherland Cup finals in the spring of 2000, they had already made it further than many had expected.

True, they were a Peter Brill (GM) club, and had coach Jeff Brick, who had stressed the importance of teamwork all season, behind the bench. Those were two big pluses. But their Sutherland Cup opponents were impressive.

The Winter Hawks had played well all season, but going into the Ontario finals against the Chatham Maroons and the St. Catharines Falcons, the Hawks were underdogs.

Still, they had the Mid-western league’s top goaltending tandem in Jeremy Day and Chris Davidson, posting a league-best 2.33 goals against average. And Cambridge became the first team in league history to both score the most goals (248) and allow the fewest (113) in a season. Mike Carter was the first Winter Hawk player to break the 100-point plateau (43-61-104) as he tied for the league scoring lead with Owen Sound’s Ryan Dudgeon (59 goals, 45 assists).

The best-of-seven playoff final opened at Galt Arena Gardens, home of the Hawks, with an impressive, though unspectacular 4-2 win over the St. Catharines Falcons.

Said coach Jeff Brick: “I have a feeling that things are really going to heat up, and that the intensity will increase as we go on.”

Cambridge (tied for top spot with Stratford with a record of 33-10-5 in league play) had won the Mid-western Jr. B league championship after beat- ing Orangeville, Elmira and Owen Sound, and faced off against the defending Ontario and Western champion Chatham Maroons, and the Golden Horseshoe champion St. Catharines squad in the round-robin provincial championships before advancing against St. Catharines for the Cup.

The defending champion Maroons had 12 returning players and dominated the Western Jr. B league during the regular season with a 47-7-1 record, 10 more wins than their nearest competitor from Sarnia.

Chatham then enjoyed a successful playoff run, beating London in their best-of-seven first round, defeating Tecumseh 4-0 in the semis and capturing the league title by beating Strathroy.

But there was a setback for the Hawks as they prepared for the round-robin series. The Winter Hawks would have to make a run for the Sutherland Cup without Day; the goalie (12-3-4 during the regular season, despite a nagging hamstring injury that sidelined him for six weeks) was called up to the Sault Ste. Marie Greyhounds on the eve of the round-robin.

“This was totally unexpected,” said captain Paul Davies at the time. But they had bigger things to think about as the Sutherland Cup series loomed.

As the final series began, the Hawks proved their mettle, winning the series in four straight games to capture the provincial championship.

Along the way they had set Mid-Western Jr. B history, becoming the first team in the 23-year history of the league to go undefeated in the playoffs.

For Cambridge, it was their first provincial championship in their 17-year existence and had come as a result of the efforts of general manager Peter Brill, who had engineered a winning formula since taking over the club a few years earlier.