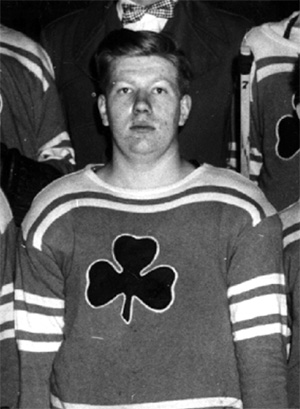 They called him ‘Fletch,’ and for 32 years, he was a familiar face to thousands of local residents as the sports editor of the Galt, and later, Cambridge Reporter.

A Hespeler native, Fletcher was active in sports as a youngster and played goaltender for the Hespeler juvenile Shamrocks in 1947, a team that came within two games of winning the Ontario title.

But it was as a newspaperman that Fletcher gained renown. He soon left Hespeler for Kirkland Lake and then moved to a large Montreal daily.

But when the paper folded Fletcher followed his roots back to Galt where he gained a large and devoted readership over the next three decades.

He spent his life meeting daily deadlines, and doing it in his characteristic soft-spoken manner, and more often than not, with a smile.

The newspaper business dominated his life. Small wonder then that he could be seen walking to and from the office day after day, year after year, with the latest edition of the newspaper folded in half under his arm. Fletcher loved humor and was never one to let a good punchline pass him by.

On the last day he ever worked at the Reporter before his retire- ment, in September 1989, he showed a young sportswriter some yellowed sheets of paper submitted to him years earlier. They included some of the funniest writing he’d ever seen.

“I could never print this stuff in the paper,” he said, “but every so often I take them out and read them over. If you ever need a laugh, read these.”

Fletcher treasured their humour, and enjoyed the brief respite from the newsroom seriousness that would so often threaten.

When computers replaced typewriters in the newsroom, it took Fletcher time to adjust. Even then he often saw humour in such “progress.”

He was soft-spoken, polite, rather set in his ways and down to earth. Said contemporary Scott Young: “Carl sometimes sounded gruff but he was always honest and kind of heart.”

Jack Scott noted how good he was to local athletes. “He was super to any athlete coming out of Cambridge,” Scott said. “He wrote the Hornets the way Frank Orr and those types would do the Maple Leafs. Carl was top-notch.”

Indeed, the Galt Sr. A Hornets hockey club and the baseball Terriers were two of his passions, as was golf.

He was hoping to indulge the latter after his retirement. But he was battling cancer, though he didn’t know it. Years earlier he’d lost a lung to the disease, and for a decade he’d struggled with diabetes. Then, just a month from the day he retired, he became quite ill. He was in the end stages of terminal cancer.

He died a month later.

His obituary in the Reporter noted that “friends and colleagues remember Mr. Fletcher as a mountain of reserve, with a poker player’s countenance that early-morning deadlines couldn’t crack.

“I saw him seethe once or twice,” said former colleague Hugh Whittington, “but I never saw him lose his temper.”

As much as anyone can be an institution in some area of life, he was it in the local world of sport.