As a kid Carl Liscombe played hockey and skated on the Grand River ice above the dam, and often played with, and against, a young girl named Hilda Ranscombe. Ranscombe went on to become arguably the greatest female hockey player in history, while Liscombe became a star with the NHL’s Detroit Red Wings. For years Liscombe was the fastest skater Detroit had.

Although he also played baseball – as a first-baseman he was the team MVP on an Ontario championship Terrier team in 1935 – hockey was his game.

During his nine-year NHL career with the Red Wings, the durable forward – he was one of the least penalized players in NHL history – held the NHL record for the fastest three goals in a game (one minute, four seconds) against the Chicago Black Hawks on March 13, 1938.

He credits linemate Syd Howe with helping set the record. “We played on the same line so long our minds were one,” said Liscombe. It was a record that held for many years until Bill Mosienko bettered it.

Liscombe first signed with the Red Wings after Detroit general manager Jack Adams came to Galt and negotiated a contract with his father, Harry. In his first season in the IHL, with the Detroit Olympics, he helped his team win the championship.

Liscombe arrived in Galt as a five-year-old from Perth but came to regard Galt as his native town. He and Lex Chisholm, who would one day play for the Toronto Maple Leafs, were in the same class.

In 1936-37 Liscombe was the leading scorer with the Detroit Olympics, scoring 15 goals in 38 games. In 1943 Liscombe played on the Stanley Cup winning Red Wing team and was named MVP that season. Liscombe led all scorers in the playoffs with six goals and eight assists. (Two years later he scored four goals in the final game of the 1945 playoff series with Boston in a 5-3 Red Wing win).

When they won the Cup they took the all-night train home to Detroit, drinking beer from the trophy and whooping it up as they went. They were met by their wives and by about 40 or 50 fans. No parade, no ceremony. They had just won the Cup. The season was over. See you in the fall. 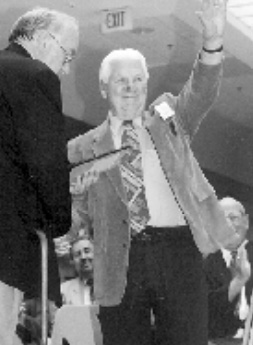 The next season was one of Liscombe’s best. He finished fourth in the league scoring race with 73 points, which tied the previous NHL record. That year Boston’s Herb Cain had 82 points; Chicago’s Doug Bentley had 77 and Lorne Carr of Toronto had 74.

Liscombe was a talented player who would have played for many more years in the NHL had it not been for Jack Adams. The two never got along, nor did they speak to one another in nine years.

Eventually Adams sent Liscombe to the minors. In 1949 he set an AHL scoring record, tallying 118 points for Providence, breaking the previous mark by 20 points. They won the Cup that year. Twice he was named the American League’s MVP.

A smart stickhandler, fast on his skates, a scorer, Liscombe played on a line with Toe Blake for the Hamilton Tigers Allan Cup championship team before signing with Detroit, leading the senior league in scoring.

In his career he won championships in the IHL, NHL and AHL. He scored 137 goals and 140 assists for a total of 277 points in 383 NHL games and was clearly one of the NHL’s outstanding forwards.

Among his accomplishments are sharing the Red Wing team record for most goals in a playoff game and most points in a game; he was also the first pro hockey player to record 100 points in a season.

The 83-year-old Liscombe – even in his eighties he never missed a home game – was in the stands when Detroit won the Stanley Cup in the spring of 1997. That summer the oldest living Red Wing returned to Cambridge for the Grand Galt Reunion. He threw out the ceremonial first ball at the game between the Terriers alumni and the Junior Bulldogs, signed autographs, and met with old friends.

Liscombe, who was in the inaugural induction class of the Cambridge Sports Hall of Fame in 1998, died of complications from leukemia on February 23, 2004 in Wailuku, Hawaii.