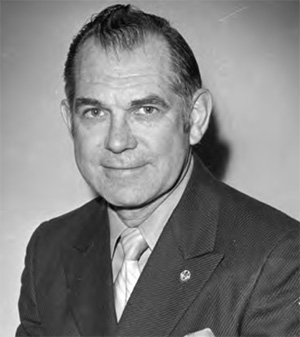 For the latter half of the 20th century, Cec Dunn was a familiar face in ballparks throughout southern Ontario, and was held in high-esteem by all who knew him.

Born and raised in Cambridge in 1914, he was one of two children. When still at Galt Collegiate, he met Jean Grieve, whom he would later marry.

Dunn got involved in sports at an early age and developed a life-long love for athletics.

The couple married in 1936, and had two children, Dorene and Bill.

Cec spent his working life as a machinist with Dexter Lawson, a position he held for 39 years.

Called the “father of Minor Softball” in Cambridge, Dunn loved the sport dearly. He began umpiring in 1945, and four years later he helped found the Galt Minor Softball Association.

He became president of the South Waterloo Umpires Association, and later served as a director, president, umpire-in-chief and clinic instructor with the Hespeler Umpires Association. The clinics provided hundreds of local youngsters with free instruction for many years.

Dunn was also involved in the sport at the provincial level, first as an executive member of the Ontario Amateur Softball Association, and eventually becoming president in 1972.

In 1996 the OASA presented Dunn with a 50 year service award.

In a newspaper article, Dunn’s son Bill admitted his father was enamoured with the sport. “He was pretty engrossed in what he was doing,” he said. Bruce Beirman, umpire-in-chief for the International Softball Congress, underscored Dunn’s contributions to the game. When the ISC wanted to pay tribute to Dunn’s lifelong service, they had to go to Cooperstown to get a Norman Rockwell umpiring figurine.

“This effort will give you an idea of how well Cec was respected by the umpiring fraternity,” said Bierman.

Well into his 80s Dunn would show up at his son’s office three times a week so they could work out together at the YMCA.

At the ballpark, given Dunn’s advancing years, he would stand out amongst the younger crowd.

“He was getting derogatory comments about ‘old man’ so he dyed his hair black,” recalled Bill.

But age meant little to the elder Dunn. Said Bierman, “When he was 84…he would move around the ball diamond as well as guys 30 years younger.”

In 1998, the same year Jean died, Dunn was inducted into the Waterloo County Hall of Fame.

As Bill notes, he was expected to play ball as a youngster, but it wasn’t until he was older that he realized the pivotal role his father had played in making softball available to so many youngsters around the city.

Dunn always kept in good shape, even in his retirement, when he could still do 30 situps on an incline board at the Y.

Dunn was one of the most familiar members of the ballpark fraternity, and many a summer’s eve was spent by ball enthusiasts in his presence.

In 2004, so the story goes, as Bill and his wife Anne were returning with Cec from the induction ceremony at the Waterloo County Hall of Fame — Cec had been inducted in ’98 — Cec joked: “There are two important people in this car.”

His daughter-in-law Anne, a gifted curler, had been inducted for her curling exploits.

When Cec died in 2008 at the age of 95, Cambridge lost an elder statesman of the ball park, but our loss was felt far and wide in ball parks across the province.