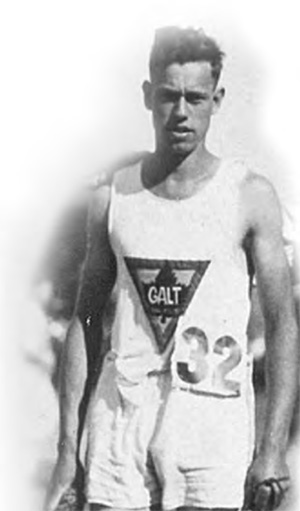 Born at St. George of Pennsylvania-Dutch stock, having descended from the first settlers to Waterloo County, Bricker’s rise to the top among Canadian runners was rapid. Beginning his career in 1923, and running both long and short distance races, Bricker specialized in the marathon distance of 26.2 miles.

In 1927 he won the prestigious Berwick Marathon in Berwick, Penn., and established a U.S. record in Buffalo with a time 17.5 minutes better than the existing Boston Marathon mark.

When he became the Canadian marathon champion that same year, he automatically qualified for the 1928 Olympics in Amsterdam. There he finished 10th after running in third place throughout most of the race.

Considered a “scientific” runner, Bricker always competed against the time clock, not his opponents. His success carried through the 1932 Olympic Games in Los Angeles. There he finished seventh in the 10,000 metres with a time 41 seconds faster than his previous personal best. He finished 12th in the 1932 marathon, bothered by muscle strains in his legs.

Bricker, an aloof man known as “The Pride of Galt,” was compared to Charles Lindbergh, the trans-Atlantic flyer for his single-mindedness, his dread of words, his impatience with pseudo-sentiment and platitudinous bunk. Like Lindbergh, he neither smoked nor drank. Never danced. Avoided picture shows. “I avoid shows,” he said, “I always feel that I would be better off at home or in bed.” Training meant everything to him. And he was always training with his close friend Billy Reynolds. The two were almost like brothers, with Bricker spending a great deal of time at Reynolds’ house. With Reynolds and Rankine and the other local runners, Bricker was known to be boyish and fun-loving.

Toronto running expert Ernie Wyer regarded Bricker as unique. “He is different from any other runner I have ever known. He is absolutely contained. He never blows before a race about what he will do, and he never boasts afterwards. Yet he is quietly sure of himself, without conceit.”

Bricker was out of the perfect mold to be a runner given that he had an insatiable thirst for training.

Bricker’s first real race came in 1923 in the Galt to Preston road race of 7.3 miles. With only two weeks training, he placed seventh.

Bricker finished fourth at the Boston Marathon, his first 26.2-mile race, though he won other marathons at Buffalo and Hamilton) Olympic trials).

“He is perhaps the most versatile runner of distinction I have ever seen,” said running expert Elwood Hughes, “and at the same time, one of the most unorthodox. He is long-striding, comes down flat-footed.”

But he had a resilience, and endurance, and a desire to never quit. “It’s easy to quit the first time,” he said. “It’s easier to quit the second time. Once you quit (a race) you’ll quit again. But if you’ve never quit, it drives you on.”

Every Saturday afternoon the 5’10” 136-pound runner would leave the Galt YMCA at Queen’s Square, run through Preston and Blair, and back. Exactly 10 miles. Sometimes he would do it twice.

Sundays he would walk 30 miles, three times around the Galt-Preston-Blair loop.

His main interest for most of his young adulthood was running. Said Bricker: “Running’s got to be part of my life.”

Cliff Bricker retired from competitive running in the mid- 1930s. He resided for many years in Fredericton, where he died on September 20, 1980.