Few will remember that before she ever competed at the Olympics or the World Championships, as a 13-year-old, Crystal Gilmore walked away from gymnastics.

It happened in 1996. Just a year earlier, as a 12-year-old, she had won the provincial championships in the novice 3 category, and later that year, made the jump to the junior level with a promising eighth-place finish at the Elite Canada meet.

For Gilmore, her finish at Elite Canada was, “a huge surprise, because I had just moved up from the provincial stream. I never competed at the novice national or junior at national championships.” Indeed, Gilmore’s rapid rise spoke of even greater things to come, yet the young star was not satisfied. Granted, the training was strenuous and the time commitment was demanding, but there seemed to be something missing for the young teenager. Still, it came as a surprise to many when she decided to take a break.

As her Kips’ teammate Yvonne Tousek set her sights on competing in her first Olympics – the 1996 Atlanta Games – 13-year-old Gilmore decided to take a break from gymnastics, opting instead for the “normal” life of a typical teenager. “I decided that I wanted to take a break from gymnastics,” she said. “I went into diving, where I competed a few times and had a lot of fun! Over that summer, I was able to go to my cottage, water-ski, go tubing, and do some things that I liked.”

During her short stint away from the sport, she made a big contribution to the sports program at Jacob Hespeler Secondary School, where she was a Grade 9 student, playing football, field hockey, track and field and cross-country running. Although she enjoyed being a “normal” student, it wasn’t long before she yearned to return to gymnastics.

“I soon realized that a life without gymnastics just wasn’t for me, and I wanted to go back,” she said. By October she was hungry to return to the gym. “I had a different perspective on where I wanted to go with the sport, and wanted to enjoy myself.”

She began slowly, eventually returning to full- time training. Her goal was to qualify for the 2000 Olympics. Other local athletes had blazed an earlier trail. Gilmore was a product of the Cambridge Kips, the same club that had nurtured some past Canadian female gymnastics stars like the late Sherry Hawco, Patti Jo Knorr, Linda Bartolini, Yvonne and Chantelle Tousek and Dana Ellis, among others.

Coached by 1972 and ‘76 Olympic team champion Elvira Saadi, along with assistant coach Vladimir Kondratenko, Gilmore gave all indications that Sydney was a very real possibility, though there were some major obstacles to overcome. For starters, her inactivity on the national level meant she no longer qualified as a High Performance athlete, making her ineligible for junior national competition throughout most of 1997. 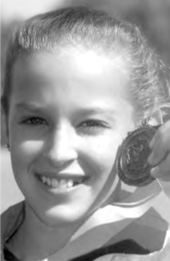 Instead, she returned to the Ontario championships, this time qualifying for Ontario’s Open team to the national championships in May. There, she helped her team to a first-place finish, while taking third-place all-around in the individual competition.In December of 1997 she returned to the Elite Canada competition where she faced the best seniors in the nation. Finishing 14th overall, she earned a spot on Canada’s High Performance roster. By 1998, her career had reached a watershed point. Beginning with a three-event final performance at the Bluewater International in March, the 15-year-old went on to stun the Canadian gymnastics community with a silver medal finish in the senior competition at the 1998 Canadian Championships. Her performances were outstanding. Heading into the last rotation of the competition, the inexperienced Gilmore was in a position to win the gold medal, but a last-minute surge by Katie Rowland earned her the gold over Gilmore, 73.762 to 73.650. In total, Gilmore walked away from the championships with five medals, including gold on the floor exercise, where she scored a 9.800 under modified scoring.

Not surprisingly, her breakthrough put her in position for several prestigious international assignments. Later that spring she competed abroad for the first time at the World Youth Olympic Festival, a competition held in Moscow for some of the world’s top young athletes. Ironically, nearly a generation earlier the Kips quartet of Hawco, Knorr, Bartolini and coach Benita Rope had been denied a trip to Moscow because of the Olympic boycott. All had been named to the Canadian Olympic team that year. Years later, Gilmore would make the most of her trip to Russia, finishing 39th all-around, while helping her Canadian team to eighth place overall.

In July, she competed as a member of Canada’s Commonwealth Games team in Kuala Lumpur, along with Rowland and Veronique Leclerc, as well as future Olympic teammates Emilie Fournier and Lise Leveille. Gilmore won bronze with the team and was seventh all-around.

In 1999 Gilmore was fourth all-around at the Bluewater International, and contributed to a team gold medal at the USA vs. Canada team challenge at Seneca.