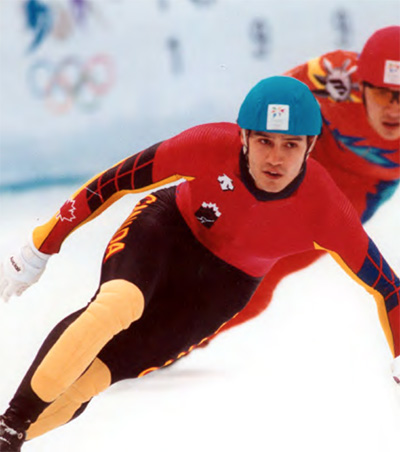 For years short track speed skater Derrick Campbell (top photo, second from left), a product of the Cambridge Speed Skating Club, had dreamed of winning an Olympic gold medal. And although he had won almost every other individual award in Canada and on the world stage, he had to wait for his third Olympic Games to realize his childhood dream.

His gold medal effort came in the men’s 5,000- metre relay at the Nagano Olympics in the late winter of 1998.

Campbell, the veteran on the team that included world overall individual champion Marc Gagnon, was a key member of the team.

Big things had been expected from the powerful Canadian men’s team at Nagano, but through misfortune, they had come up largely empty-handed.

Finally, in the last short track event of the 1998 Olympics, Campbell and his teammates could not be denied.

Campbell’s gold medal had been a long time in coming. As early as the 1994 Lillehammer Olympics in Norway, he had been a medal favorite. Indeed, Sports Illustrated magazine had Campbell pegged as the gold-medal favorite in the 500 metres at Lillehammer.

And he came close. Very close. In the 1,000 metres, he looked unbeatable, advancing to the Olympic final with three other skaters. There, leading the final with just two laps remaining, he was taken out by Britain’s Nicki Gooch from behind. 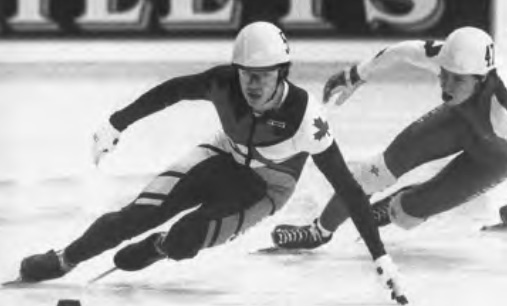 Although his gold medal hopes were dashed, because the skater who took him out had been disqualified, all Campbell had to do to win the bronze was finish the race. Which he did. Or thought he did. A monumental mix-up ensued in which the lap counter failed to put the correct number of remaining laps on the clock. Campbell believed he had finished the race, only to find out minutes later that he had skated one lap short of the required distance. By then it was too late, and the bronze medal was awarded to Campbell’s teammate Marc Gagnon, who had not even skated in the final.

Campbell, who was at the peak of his game, later fell in the 500-metre semi-finals and failed to advance to the finals. The Canadian men met with further bad luck when one of their number fell in the relay.

Disappointed, but not deterred, Campbell came close to winning the world overall championship that spring. He ended up third overall. Three years later he won the world 500-metre championship.

In 1998, after winning his long sought-after Olympic gold – it was Canada’s final Olympic team gold of the century – the Canadian men won the relay at the World Team Championships and the World Championships. Out of the three major international competitions, they had not lost once.

The modest Campbell, known for his sprinting ability and world-class start, was one of the most gifted speed skaters Canada ever produced.

Following his retirement from competitive skating, Campbell went on on to coach the American short track team at Colorado Springs, and then was named head coach of Canada’s national men’s short track team where he was based out of Montreal.

A gold medalist as a skater, he coached several skaters to gold medals in the ensuing years, leaving his lasting imprint on the sport.