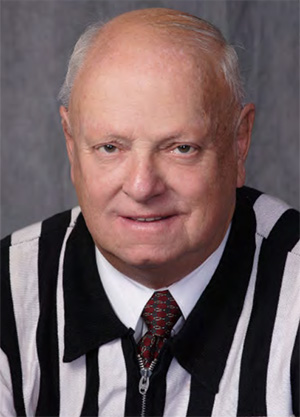 Don Laurence has been an integral part of the sporting fabric of Cambridge for a lifetime.

A Cambridge native who spent his boyhood years in Preston, Laurence took to sports early. And he loved them. Baseball and hockey were the main sports, but almost anything that required athletic ability and was competitive interested Laurence.

One of his coaches in Preston was the late Tim Turow, a mentor who was a model of involvement. Today, the Cambridge athlete of the year award is named in his honour.

Turow and Don’s father, Rosie, were great friends from the old days. “Tim lived upstairs at our house on Sherring Street during the Depression,” recalled Don. Turow guided the Preston Juveniles to an Ontario championship in 1947. Don was a catcher on that team and played an integral role in helping the squad win the all-Ontario title. In 1953, after marrying his high school sweetheart, Jean Connell, he moved to Hespeler. He soon carved out a niche as one of Hespeler’s most recognized volunteers, especially around the hockey rink, serving as coach, executive member and referee.

When he retired from officiating in 1996 – he had maintained his Level IV refereeing certificate until then – he was the longest serving referee in Hespeler Minor Hockey Association history. He also officiated in the Ontario Minor Hockey Association (OMHA) and the Ontario Hockey Association (OHA), serving as OMHA referee-in-chief and supervisor of officials. He also spent six years as Tri-County League referee-in-chief and supervisor of officials. Through the years he was instrumental in the mentoring and devel- opment of young officials in this area, including Bob Hodges. He also had the honour to coach such play- ers as Paul and John Woods, Mike Zettel, Kirk Maltby,

and Ken and Brian Ellacott. He also had the opportu- nity to coach his three sons, Bob, Red and Tim, each of whom had successful hockey careers in their own right. All three played junior hockey,andRed moved on to the NHL after being a high draft choice of the Atlanta Flames.

He played in Atlanta for two seasons before being traded to St. Louis. When Laurence was presented with the Don and Benita Rope sports contributor award in the late 1990s at the Cambridge Sports Awards, it came as no surprise to anyone but Laurence himself. 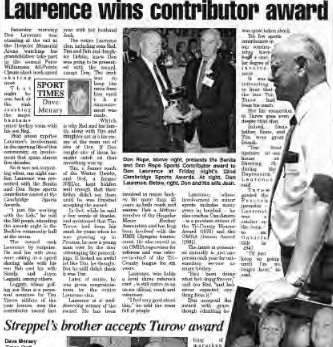 But guided by the love and passion he has for sports, it was as a coach that Laurence derived the most pleasure. He had an uncanny ability to communicate and earn the respect of his athletes through his knowledge of the sport. He was always eager to share that experience and knowledge, whether it be taking a young first time coach under his wing or whether it be going to a rink early on Saturday morning to mentor young and upcoming officials. In 1987 he joined his son Tim, to coach the Waterloo Midget “AA” Hockey Club to both a league championship and the Ontario title. Tim regarded his mentoring and experience as a key factor in the team’s success.

Because of his tremendous involvement in hockey over the years, he was presented with the OMHA Honour Award in 1991, an award presented annually to just one highly-deserving person.

He was presented with the Tri-County Honour Award in 1975.

On the day following the presentation of the Cambridge Sports contributor award in 1995, he was, typically, at the arena more than he was at home. To begin the day he was watching his grandchildren compete in the Peter Williamson All-Points Classic short track speed skating meet at the Hespeler Memorial Arena. That evening he was back at the arena coaching the major bantams hockey team with his son Red. The only thing he didn’t do was referee a game in the afternoon, but after all, he couldn’t stay young forever.

“I just like working with the kids,” he said.

He had encouraged his children in hockey from their early days, and they were good students of the game. Red, Bob and Tim all played Junior A hockey, and Red went on to play professionally in the NHL and overseas in Switzerland.

Laurence’s involvement in the local sports scene includes years of Can-Amera partici- pation, a natural extension of his softball participation over the years. When he arrived in Hespeler he had played for many seasons with the Hespeler Tartans and Hespeler Simplicity of the Inter-City Fastball League. He later turned to coaching both minor softball and with the Hespeler Beehives of the Inter-County Fastball League.

Don served from 1998-2001 as president of the Ted Wake Senior’s Centre in Cambridge and continues to participate in many activities offered by the Centre. He has also served on many committees over the years, most notably the committee which worked closely with the City during the transition between the Old Hespeler Arena and the building (and subsequent twinning of the new Hespeler Arena) in 1989 and 1990. He also sat on the “Remember When” committee which was formed to bid a fond farewell to one of the City’s oldest landmarks, the Hespeler Memorial Arena. In 1996 Don also sat on the Hespeler Old Boys Reunion committee which celebrated its first reunion since 1966. Hespeler celebrated its 90th birthday with this reunion which was a huge success.

He enjoyed clowning around in the annual Hespeler Santa Claus parade, a parade he has participated in since its inception. By being a clown or Santa Claus for parades and special events, he has appreciated the smiles and interaction with the children; this, like coaching, has always fueled his desire to continue giving back a little something to the community which has given him so much over the years.

“He’s been doing what he’s been doing for years,” said son Red on the night he was given the Don and Benita Rope award. “And he’s never expected anything from it.”

But Don Laurence would be the first to tell you he got much more out of minor sports than he put in. He had the inner satisfaction of helping countless others over the years.

“I’ll just keep on going until I’m no longer here,” he said.