In the spring of 1955 Sault St. Marie sportswriter Paul Patton wrote a column about Don Rope, calling him one of the most gifted and versatile athletes to ever make the Sault a port of call. “We don’t know if the folks down in Galt, where he’ll be teaching next year, know what manner of man they’re getting,” wrote Patton. “It won’t take them much effort to find out.”

It didn’t. In the next few decades Rope became an invaluable member of the community, providing rare leadership in many areas of the city’s sporting life. But his influence extended beyond the confines of Waterloo County to the national and international arenas.

Rope, a Winnipeg native and gifted young hockey player who had learned to play the game on the frozen Red River, had been brought east by the Toronto organization to attend St. Michael’s College after signing a prestigious ‘C’ form.

As a kid Rope was a Leaf fan, thanks in large part to his mother and Foster Hewitt. He kept a picture of his idol, Syl Apps, in his scrapbook all his life. And he counted Jesse Owens, whom he saw in Winnipeg, as one of the major influences of this period. Rope lost his mother early, and his father went to Vancouver fol- lowing work, so at 13, Rope stayed with relatives and friends, and even- tually attended St. Paul’s College H.S. as a boarder. His sports: hock- ey, football, baseball – he played third base for the Elmwood Giants Jr. team, provincial and Western

At St. Mike’s, where he roomed with Tim Horton, he blossomed under the coaching of Joe Primeau and attended the Leaf camp in ‘49. He also enrolled at the University of Toronto, playing soccer and hockey for the Varsity Blues, and began playing with the Toronto Marlboros seniors under Primeau. The Dukes won the Allan Cup that year. “A lot of guys in the pro ranks today don’t belong on the same sheet of ice with him,” said one writer.

Rope would represent Canada at two Olympic Games – 1956 at Cortina, Italy, and 1960 at Squaw Valley, Calif. – winning bronze and silver.

Rope, who became physical education head at Glenview Park Secondary School, was an active member of the Soper Park Tennis Club, even teaming with the legendary Hilda Ranscombe to win some doubles championships. 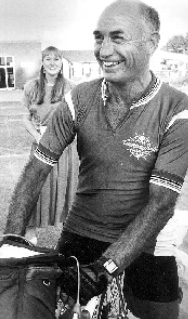 “One of the nicest things about coaching is that you meet some wonder- ful individuals, future leaders of society,” he said.

The highlights were many: the Cortina Olympics, the Allan Cups, the Leaf camps and seeing his three daughters grow up. They were all top athletes in their own right.

Rope was a member of Canada’s elite coaching staff from 1975-82, and won the Cambridge Contributor award in 1977. Today the award is named the Don and Benita Rope Award.

In the late 1990s Rope became a member of the Cambridge Trails Advisory Committee and was instrumental in organizing the Cambridge Tour de Grand. He received the Ontario Medal for Good Citizenship in 1976, and has earned many other accolades over the years, including a prestigious Stewart Award for teacher excellence in 1987, the year he retired. He won the first Stewart Award in 1974. “I get more from the students than I give to them,” Rope said. “I feel so fortunate to have met so many special people in all walks of life, especially in teaching and in sports, and to have three wonderful daughters and families to enjoy. There were some setbacks, but only temporary.”