At the time of her induction, Dorothy Kerr was less than two months shy of her 100th birthday.

And during that time she participated in many sports. Born in Galt on July 2, 1912, Dorothy Gibb earned her first athletic distinction four years later when she was presented with her water wings in the swimming area of Mill Creek at Soper Park. At age 11 she earned her Masters swimming badge at the new Galt YMCA on Queen’s Square.

At the Y she became a lifeguard and taught gymnastics.

In 1928, at the age of 16, she played catcher and shortstop for the Galt Swastikas softball team, an open age group squad. Dorothy’s sister, Goldie Gibb, played third base for the same club.

Dorothy was the first lady to wear a catcher’s mask in the league. In those days no chest protector or shin guards were worn.

The team played its home games at Soper Park, and drew huge crowds when matched against the rival Preston Rivulettes.

In 1931 the team won the Ontario championship.

Dorothy was active in many sports as a participant, but in 1952, with the help of Jean Bull, she started the Galt Skating Club, a 25-member club that helped nurture a couple of young skaters who would go on to star in international circles — Toller Cranston and Ron Shaver. The two got their first taste of figure skating with the club in 1953 and would become rivals as adults. As of 2012, the club still operates out of Galt Aena.

At times she paid for the arena and the skating pro, Miss Ferguson, to keep the club going in those early years. In 1955-56 Doug and Gaye Kimple took over the club.

One of the prime reasons she began the club was so that her daughter would have a skating club to belong to.

Dorothy played badminton at the Highlands Badminton Club on Coronation Blvd., and tennis at the Soper Park Tennis Club, where she excelled in singles, doubles and mixed competition. 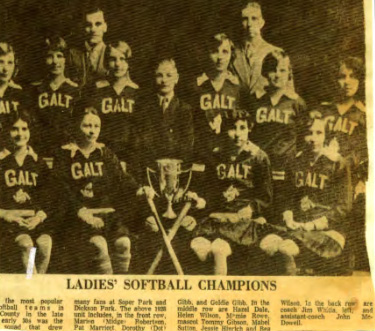 In 1947, at a time when ladies were permitted to play golf with restrictions at the Galt Country Club, she took up the game and went on to win the club championship several times in the 1950s. That was as far as she got, however, as there were few opportunities to advance beyond the club level for women in those days.

She also had the distinction of being the first person in the area to have a battery-powered golf cart.

In 1951 Dorothy played a pivotal role in establishing ladies curling in the area when she approached Bob Carson at the Galt Curling Club to start a ladies league.

That first year Bob taught 10 ladies to curl, with Dorothy skipping one of the teams.

One year later Dorothy, as skip, along with Joan Chicoch (vice), Alice Brown (second), and Ruby Smith (lead), won a qualifying bonspiel in Guelph to advance to Peterborough, but the team suffered a disappointing bonspiel, failing to win even one game. Dorothy had taken a sleeping pill on the train and was sick during the bonspiel.

In 1965 she skipped the winning foursome at the club level, and also won district and Toronto Boulevard Club (S.O.L.C.A.) titles.