From a city with a rich heritage of distance runners came a Southwood graduate by the name of Doug Consiglio who ranked with the best of them.

Joining Cambridge Sports Hall of Fame inductees Cliff Bricker, Billy Reynolds, Scotty Rankine and Ab Morton, Consiglio, like the others, was highly successful at the national and international levels.

Doug Consiglio’s running career took him from the Can-Amera Games to the Olympic Games, from the Southwood high school track team to the World Student Games, and from the Cambridge Track Club to the University of Arkansas.

His accomplishments include: Canadian records, NCAA championships, World records and an appearance in the Guiness Book of World Records.

Consiglio’s rise to world-class status began in 1986 when he became the first Canadian to break the four minute mile indoors, running the distance in 3:55.91. That same year, in front of a crowd which included his parents, Consiglio set a new Canadian record for the indoor 1500 metres.

During the incredible year of 1986 Doug rose to No. 2 in the world in thei indoor mile.

A scholarship student at perennial track power- house, the University of Arkansas, he and his teammates in 1986 established a world record at the prestigious Penn Relays in the distance medley. Consiglio anchored the Razorbacks team to a time of 9:22.6.

He also won the NCAA 1000 metres, setting a new record for the event and missing the world record by less than one second.

By the time he left Arkansas, Consiglio had participated on an unheard of eight NCAA championship teams (four in track and field; four in cross-country). In 1988 Doug was a member of the Canadian Olympic Games team in Seoul, South Korea, competing in the 1500 metres. He was also a witness to history, seeing Canadian sprinter Ben Johnson set a world record in the 100 metres before being stripped of his gold medal after testing positive for steroids. 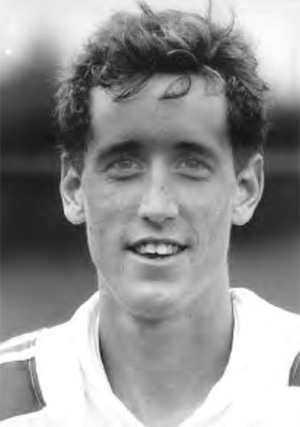 Doug’s successes continued well past the Seoul Olympics. In 1991 Consiglio had an extraordinary year. Not only did he place fourth in the 1500 metres at the World Student Games in Sheffield, England, but he also won the Prefontaine Classic Mile in Oregon.

In 1998, at York University, Doug was one of 100 runners in a continuous relay – each running one mile – which earned a place in the Guiness Book of World Records.

In 1995 he was part of a team that won the USA indoor championship in the distance medley relay in Atlanta – his last noteworthy accomplishment on the track – and a couple years later, he starred in a national NIKE commercial which featured runners. It appeared all over North America in 1997.

In 2001 he was the Business Development Manager at Sport Brain Inc. in Sunnyvale, California.

Fisher at Southwood – for introducing him to his first serious training and set- ting him on a path that would become one of the most distinguished careers for a middle-distance runner in Canadian history.