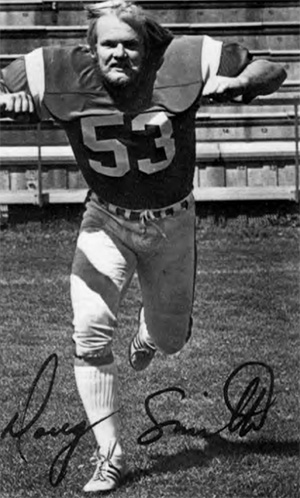 He grew up loving hockey, but ended up playing on two championship CFL football teams.

As a youngster, goaltender Doug Smith and his Galt Minor Hockey Association team made it to the All-Ontario tournament. But during his first four years at Glenview Park Secondary School, Smith never played on a winning football team.

Remarkably, a few short years later he was one of the key members of Marv Levy’s CFL Montreal Alouettes.

“We won a couple of games in my first four years at Glenview,” recalled Smith, “but I was away.”

Still, Smith was a hard worker and one of the best players in the city.

Levy, a member of the Football Hall of Fame, went on to coach the Buffalo Bills to four Super Bowl games. “I remember Doug very fondly,” said Levy. “He was an important part of our Grey Cup teams.”

Indeed, with Doug playing, the Al’s won two CFL titles. Those were glory years for both Smith and Levy.

Smith’s name rekindled memories of one of the best periods of Levy’s life. “Some of my fondest memories are of coaching and living in Montreal,” said Levy.

“Doug was very hard-working and on the ball. He played error-free football and was a delight to coach.”

When Smith entered his final year at Glenview in 1971, Don Rope came back to coach the senior Panthers. He had coached the team to the CWOSSA title in 1960 with Ron Smith, Doug’s cousin, at quar- terback.

That last high school year of Doug’s was memorable. They lost their first game to Southwood, but never lost another game. Smith said to Rope: “Do you realize I’ve been playing for five years and this is the first time I’ve ever played in a winning game?” Glenview went on to win the South Waterloo Athletic Association (SWAA) title.

“The spiritual leader and captain of that team,” said Rope, “was Doug Smith.”

Smith, like many others on that team, played both ways. “He was very modest, athletic, and dedicated,” said Rope. “He really ate it up. He was just the ideal kind of guy to coach and he started to come into his own as a football player that final season.”

It wasn’t easy. Often he would have to hitch-hike home to Rockton after practice. “You had to want to play the game,” Smith recalled, “but we were a close group.”

Smith had nothing but praise for coach Rope. “He sure could bring out the best in you as an athlete. He was a remarkable coach.”

Smith capped off his high school career by being named Glenview’s student athlete of the year.

At that point, Rope encouraged him to consider playing football at university. Prior to that, Smith looked at football as a way to stay in shape for hockey, but now he began to think of football as his favourite sport. 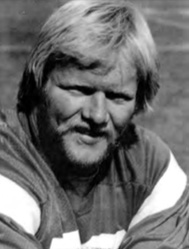 Although there were a few U.S. colleges interested in him, he chose Wilfrid Laurier University, where he starred for three years before graduating in 1974. The Golden Hawks were coached by the legendary Tuffy Knight, who Smith called “one of the best college coaches ever in Canada.”

It stood him in good stead for his future pro career. “When you play for Tuffy Knight, you know how to hit,” said Smith. We felt we were going to go out and kick butt every time. Tuffy could really motivate you.”

But Smith was extremely coachable. Levy agreed. “He was bright, very hard-working, and always positive. He was a little undersized, but very solid, and he got on well with his teammates.”

He had a great deal of success at Laurier, and although they made it to the College Bowl, they came away empty. “We had great teams and I think we were all disappointed we didn’t win the Vanier Cup for Tuffy. That was probably the biggest disappointment of my college career.”

Said Knight: “Doug was a raw-boned, raw-talented individual when he came to Laurier. He was an extremely hard worker and a fierce competitor. He was a pretty tough guy.”

He played both football and hockey his first season at WLU.

Knight recalled one incident, when Smith pulled his groin, that showed Doug’s true mettle. “That was before we had trainers. We tried hot towels or ice, I forget which, and finally I had to say ‘Doug, you’ve just got to come out and learn to play with it. Our season is so short, we just can’t afford to miss any games.’”

So Smith played. No hesitation. No complaints. Knight asked him how his groin was.

“I can’t remember if he said he had pulled the other side and it balanced things out, or if it went away, but that was the type of guy Doug was.”

Smith, a captain at Laurier, played offensive guard and was named OUAA all-star and CIAU All-Canadian his final year. That year Laurier fielded what was in Knight’s estimation, was perhaps the finest college team he ever coached in his nearly 30-year career.

Doug was drafted in the fourth round by the Montreal Alouettes – he learned of his selection while on spring break in Florida – and was off to training camp the summer of ‘74, armed with all that coaches Rope and Knight had instilled in him.

He had signed for $9,500 at a time that the veterans were on strike, so it worked to his advantage. Still, they made him a centre, a position he had never played, and things went well, until the veterans returned. “Then you saw how football was really played.”

Heisman trophy winner Johnny Rogers was with the Als, and after camp closed, only two or three rookies had stuck. Smith was one of them. Dressing for 13 games, he played in five. “It was an exciting time in Montreal,” said Smith. “I was a country boy living in the big city.”

He spent seven seasons in Montreal (1974-80), and two with the Argos (1980-81), before returning to Montreal to play for the Concorde (the Allouettes’ successors).

He went back for the 1985 season but left and ended up in Hamilton, though no deal could be reached.

He had played on two Grey Cup championship teams (1974, 1977) – his teams went to six Grey Cup games (five with Montreal, and one with the Argos) – and he was named an Eastern all-star (1979). That year he was part of the line that allowed running back David Green rush for a record 2,000 yards.

That was one of Smith’s biggest accomplishments, as was winning the Eastern Final, something he said was always a bigger game than the Grey Cup.

“Marv Levy was a genius and always surrounded himself with good people,” said Smith.