Eion Donald Leggatt is regarded as the city’s best-ever golfer.

Leggatt grew up in Cambridge and attended Galt Collegiate Institute. He began playing golf at an early age. His father Jack, loved the game and was in- strumental in not only getting him started in the game, but in developing junior golf in the city.

And his mother, Joyce — both Jack and Joyce were inducted into the Cam- bridge Sports Hall of Fame — was heavily involved in speed skating circles, both in Cambridge and later provincially and nationally.

Eion, who, as an emerging professional golfer finally relented and changed his first name to “Ian,” to avoid the confusion that had followed him with the traditional spelling of his first name, was a national calibre speed skater, but it was golf that drew him.

He turned professional in 1990 and went on to play several years on the Canadian professional Tour and then the Nationwide Tour before finally earning his PGA Tour card.

He met his wife while she was working for one of his coaches, Mark Evershed.

When healthy, he showed flashes of brilliance, such as on February 20, 2002, when he made his mark on the PGA Tour with a win in the Touchstone Energy Tucson Open. 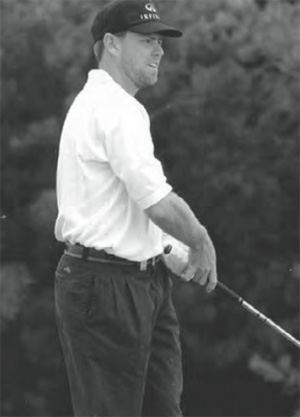 Leggatt served as Athletic Director for the Cerebral Palsy Foundation of Tarrant County in Ft. Worth, TX, and has worked with kids with dis- abilities. He was sponsored by the Ronald McDonald Children’s Charities to raise money for kids.

Among his career highlights: he ranks 10th in All-Around on the BUY.COM Tour, and was named June 2000 PGA Player of the Month.