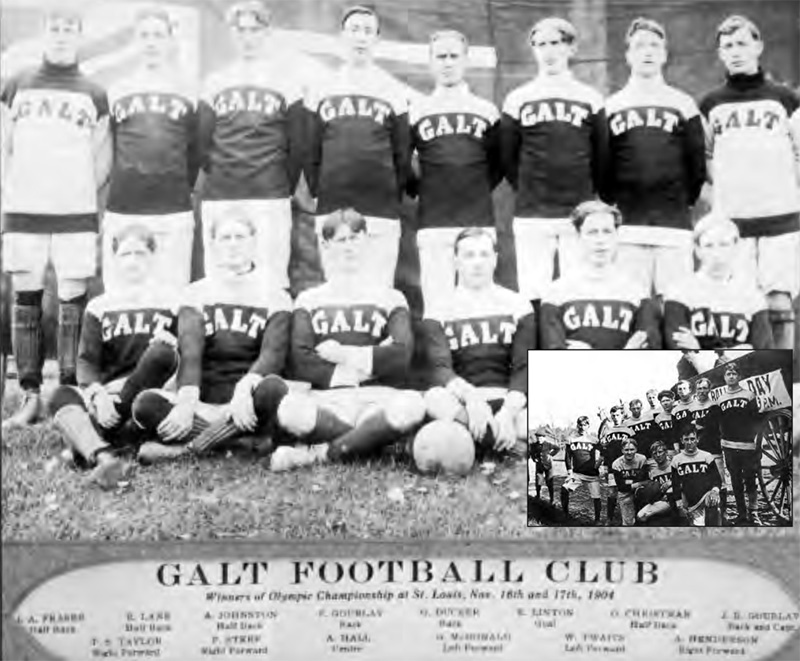 It would have surprised no serious follower in the city of Galt that the Galt Football Club won the right to represent Canada in 1904 at the Olympic Games in St. Louis. The club, comprised entirely of local talent, had a 25-year record of success in the sport we now call soccer. With 44 championships during that time, Galt was considered the football capital of Canada. A 2-0 victory over their main rivals, the University of Toronto Varsity Blues, guaranteed a trip to St. Louis.

The Games in 1904 were originally scheduled to take place in Chicago, but President Roosevelt urged for the Louisiana Purchase (World) Expositio was being held there at the same time to showcase the world’s newest technologies (electricity, automobiles, airplanes.

The Games were held from Monday, August 29, to Saturday, September 3, with events being held at a 35,000-seat stadium.

On Olympic game days, enthusiastic crowds gathered in the cool November weather for the posting of scores at the Galt Weekly Reformer on Water Street. The weaker of Galt s opponents were defeated 7-0 in the first contest. When the stronger opponents were beaten on the strength of four second- half goals, Galt had its first and only Olympic team sport champions. Indeed, the victory was Canada s first-ever team gold at an Olympic Games.

Returning home on Nov. 21, 1904, the players were greeted by a crowd of 2,500 at the railway station on North Water Street. It was the biggest celebration in Galt s history. The enthusiasm continued through the day with a torchlight parade through the city to Scott s Opera House at Queen’s Square. One week later there was a formal reception for the team, also held at the Opera House.

Galt, long called the Manchester of Canada because of its industry, had now won distinction onthe athletic field, through its 1904 football club, which had given its citizens an everlasting place in Canadian sports history.

The Olympic movement was to grow steadily through the remainder of the 20th century, but on this third Games of the Modern Era, Galt had proved its mettle.