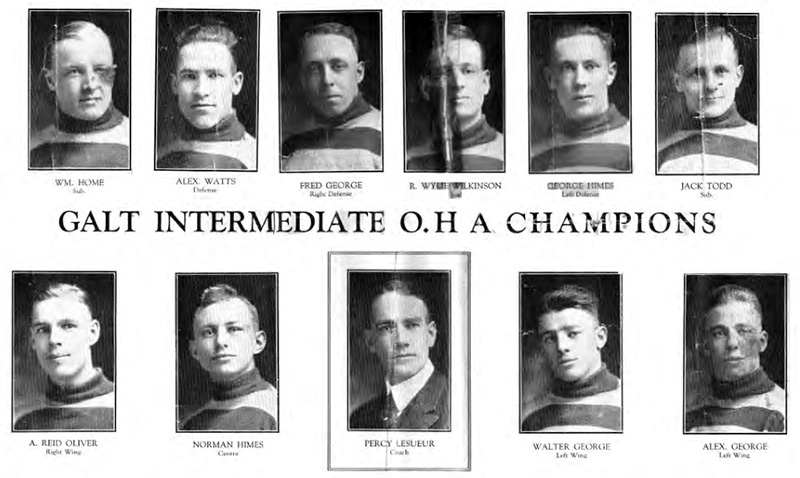 The Galt Intermediate AAA hockey club came into its own in the 1920-21 season. It was right after the Great War, and at least one of the players, Reid (Speedy) Oliver, and coach Percy LeSueur, had served overseas.

Galt’s 11 players, 10 of whom were Galt natives, gained a formidable province-wide reputation that season, and had fans in other communities who loved to watch them play.

When they captured the John Ross Robertson Cup, emblematic of hockey supremacy in the province, Galt held a celebratory banquet in the team’s honour, at Memorial Hall. Nearly 300 people, representing all sectors of local society and the province’s sporting elite, were present and community spirit ran high. The team was regarded as the finest Galt had ever iced.

Held on Wednesday, April 13, 1921, it was one of the most notable sports cel- ebrations in the town’s history, on a par with the homecoming of the 1904 Galt Olympic soccer champions when they had returned from St. Louis. 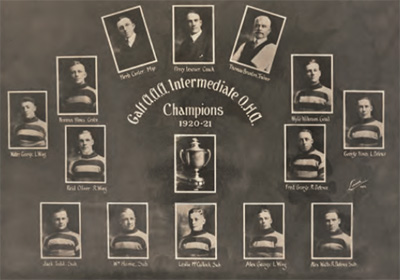 Former city resident Louis Blake Duff, past-president of the OHA, was to have been the guest speaker but had taken ill and was unable to attend..

On hand was Toronto mayor Tommy Church and most of the hockey leaders from that era. There was a good mix of entertainment and speeches; the evening was presided over by local merchant and hockey supporter W.W. Wilkinson, whose son Wylie, and nephew, Reid Oliver, played on the team. Young Wylie, the goalie, was also a member of the club’s executive.

Players received gold watches, medals, photographs and skates. They also sang in duets — Normie and George Himes belted out a tune, as did mayor S.E. Charlton and Toronto mayor Church.

Coach Percy LeSueur, who had played on the Ottawa Silver Seven and would be inducted into the Hockey Hall of Fame in 1961, said he had never coached a finer group of young men. He was also presented with a watch and chain and praised for the work he did with the team. W.A. Hewitt, secretary of the OHA, said the Galt organization was a credit to the city and the OHA. With more than 70 teams vying for the honour Galt had won, it was a notable achievement.

R.E. Knowles, former minister at Knox and well-known newspaperman for the Toronto Star, called from Hamilton with his congratulations, and the evening concluded with the singing of Auld Lang Syne.

The Galt Amateur Athletic Association (GAAA) had only been in exis- tence two years but had already brought renown to the city and, as Wilkinson noted, a committee was preparing a report on their next big task, building a modern arena with artificial ice. The hockey team’s successful season had only strengthened the desire to build a new arena.

With tremendous community support — residents took out shares in the arena — Galt opened its Soper Park arena (Galt Arena Gardens) for the 1922 season.

In the inaugural game. Speedy Oliver scored the first goal, and kept the puck on which he inscribed the final 9-5 score in favour of Galt.