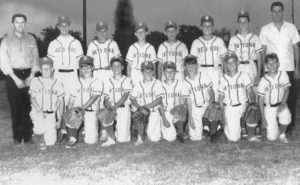 It was a memorable summer for all of humankind because of the Moon landing, but for a young group of boys representing the Galt Minor Baseball Association, the summer of 1969 was much more.

That was the year the Galt Nationals Little League baseball team became Ontario champions, thrilling their families and indeed, the entire city of Galt by winning the Ontario title in Windsor and then going on to play at the Nationals in B.C.

The team, coached by Carl Marshall and managed by Johnny Wilson, comprised a talented array of young all-star ball players who, on August 3, 1969, won the Ontario championship by beating the Ottawa Canterburys in the final game to capture the Hameo Coke Trophy in the 13th annual provincial Little League Championship.

The format for such teams was different from today’s travel teams. Back then, the all-star or ‘travel’ teams would be selected and there would be a two-week break from the regular schedule to play in a tournament.

Jim Hodges was a member of that team. “We kids were shielded from the expectations and the pressure and as I remembered it, just had fun and enjoyed the moment.”

In the Ontarios, they won their first game in extra innings, then lost the second in extra innings and won the semi-final with two runs scored in the bottom of the last inning.

“I remember my Mom was unable to attend our final games as she had a health event that I wasn’t made aware of since I was billeted with a Windsor family,” said Hodges. “Her blood pressure was through the roof. I don’t think she ever watched me play any sport again.”

The team would go through some pressure-packed moments that summer — a couple of their games were in front of thousands of people — but the parents probably felt the pressure more than the boys. “I don’t think any of us ever thought very much about that. We were just a bunch of kids playing baseball and having fun.”

A Little League rule stipulated that every player had to play at least two innings and have one at-bat during each game.

“Our accomplishment was truly a team effort,” said Hodges. “To win, we had to be the best collection of 14 players.”

At their first tournament in Binbrook, they won a playoff against Ancaster 5-1 and 5-0 in a best-of-three, then advanced to the Ontario finals in Windsor.

At Windsor, they won their first game against Port Arthur (Thunder Bay) but on the second night lost to Ottawa. “We felt we should have won that game and we were looking forward to an opportunity to play them again,” said Hodges.

The next night, a Friday, they won a nail biter against the hometown Windsor squad, winning on a passed ball at home plate on the last play of the game. Catcher Brian Shouldice made the play at home plate to win the game 5-4.

Pitchers were only permitted to pitch 6 innings — they were 6-inning games — and then had to have 24 hours rest between starts. That meant no one could pitch consecutive games.

Only Hodges and Brad Campbell had pitched. That Saturday afternoon it poured rain. Teammate Darryl Wilson was warming up to possibly make his debut on the mound in case he had to pitch. Fortunately the game was called due to the rain and was played  Sunday afternoon.

That meant that Campbell and Hodges could pitch. The Galt Nationals defeated Ottawa two straight games to advance to the Dominion championship in British Columbia.

The national tournament, which included the top teams from B.C., the Prairies, Quebec and Ontario as well as the Maritimes, was held in August on Vancouver Island at Saanich, B.C. The team was tired from the long journey. It was raining and they got off to a bad start, losing 7-4 to Quebec, and 2-0 to B.C., though they were in both games.

“I think that’s one thing that disappoints me is that we could have performed better, but we just didn’t have it going,” said Hodges. Had they won in BC they would have earned a trip to the World Little League Championships in Williamsport, Pennsylvania.