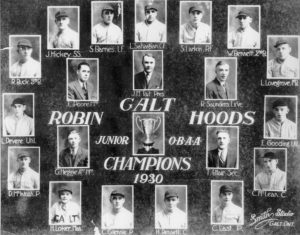 How good were the Galt Robin Hoods junior baseball team from the late 1920s and the early 1930s?

As good as they get. Managed by Laurie Poore and coached for portions of that era by Robert (Bush) McWhirter — George Heggie was the assistant manager — the Robin Hoods boasted some of the best young baseball talent in Canada.

This, at a time when the Depression had taken hold and people badly needed a distraction from the economic uncertainty that was wreaking havoc in people’s lives.

It was a time of portent. Al Capone’s name was in the news. R.B. Bennett was Canada’ s prime minister, and a new leader was emerging in Germany by the name of Adolph Hitler.

In Galt’s baseball epicentre, Dickson Park, a hotbed for southern Ontario baseball in those days, both the senior Terriers and the junior Robin Hoods regularly vied for provincial honours.

Poore and McWhirter, who had experience with the Toronto Maple Leafs professional club, were a big part of that success.

The Robin Hoods earned Junior Intercounty laurels from 1929 to 1932. They also won the junior Ontario championship in 1930 and 1932. In 1931 they nearly reached the finals, losing to the Toronto Columbias in the semi finals.

For the Galt juniors, Toronto teams were often considered the toughest competition along the way to the provincial finals, but the Robin Hoods, in those early Depression years, were not to be underestimated.

They reached their zenith in 1932 when, after winning the Junior Intercounty title, they advanced through the Ontario playdowns, beating Owen Sound, Brantford and Niagara Falls in succession.

By the time they faced the Toronto McCormicks in the Ontario semi-finals, their reputation had preceded them.

It was mid-September, 1932. The Toronto nine knew what they were up against. Their own paper, the Globe and Mail, had written: “The Robin Hood’s are one of the best junior teams to invade Toronto. They have everything that makes up a championship team, and it is almost impossible to imagine any team in the province defeating them.”

Yet the Toronto team was not against trying to intimidate the Galt squad. Not known for their sportsmanship, in warmups, the Toronto nine stayed on the field long past when they should have yielded to the Galt players. They argued that they knew the rules and that Galt was unaware of the rulebook.

But they were barking up the wrong tree. This was a Galt team with Bush McWhirter and Laurie Poore at the helm, two diehard baseball men who had been around the block and were from the old school; in McWhirter’s case, his language was as decidedly colourful as he was crusty.

McWhirter coached the Kitchener Panthers senior team that season but asked to come back as volunteer coach to help Galt in the playoffs. During the regular season he was trading barbs with the Galt fans every time Kitchener invaded Dickson Park, but that was all forgotten as his profanity-laced language now peppered the opposition.

In the 1932 finals against London, he took offence to a sportswriter sitting on the Robin Hood bench. “Get off the bench and make room for the players,” he told the scribe.

Later, the reporter had the last word in the Ingersol Sentinel-Review:

“Bush takes an apparent delight in strong language, to his team members and everyone else,” said the reporter.

But McWhirter was typically unapologetic, saying he had one type of language and behaviour for church, one for home and one for the ballpark.

It was the third straight year Galt had advanced to the provincial semi-finals. Two years earlier (1930) both the Terriers and the Robin Hoods had won their respective OBAA championships.

In 1932 Galt opened the semi-finals against Toronto with Jack Murphy on the mound and Carl Liscombe at first. Both played superbly.

Liscombe would go on to play in the NHL with the Detroit Red Wings, while Murphy graduated to the Senior Terriers ball team where he once pitched 27 consecutive innings, thus earning the nickname ‘Iron Man Murphy.’ He proved his mettle a few years later while in the Canadian armed forces during the Second World War. His ship was torpedoed by a German U-boat and sank in the Mediterranean Sea. He clung tenaciously to some flotsam for 24 hours before being rescued and taken ashore to North Africa.

The two Galt natives had grown up watching fabled Terrier teams at Dickson Park, as had another young lad, Earl Gooding. Gooding began as a mascot with the Robin Hoods in 1929 and graduated to become a regular within a couple of years.

During the semis in 1932, held in Toronto’s Stanley Park, the bleachers stretched down both base lines and encroached on the field, putting Murphy in close proximity to the howling masses, but he was not the least affected by the shouting and taunts. Reports say he pitched a determined, cool game displaying a reserve, especially when he was behind a batter, that belied his young years. He had pitched an impressive game a week earlier to lift Galt over Niagara Falls.

Still, the player of the game was Liscombe, the first baseman, who was the pivot man for the defence as Galt won 8-5 and captured the three-game series easily.

For at least four years the team was the class of the league. Their 1930 IC title was indicative of their dominance as they downed London 12-4 in the deciding game on Saturday, August 9.

It was the golden era of sport, with other noteworthy athletic performances coming on the same weekend from Galt’s own Billy Reynolds and Canadian Olympic 100-metre dash champion Percy Williams. Williams set a world record at a University of Toronto meet, and Reynolds set a Canadian record in the 10,000 metres.

For the Galt Juniors it was their second straight Intercounty baseball title. They had earlier beaten Kitchener in the playoffs.

“The local nine completely outplayed the opposing nine with the first four innings a parade of runs while London was held scoreless for five frames,” began the story in the Galt Evening Reporter. With first-rate pitching in the form of Last, Glennie and McIntosh, they drew large crowds during the finals. Names like Reid Buck and Louie Sahagian entered local baseball lore during this era. And it was no wonder. The boys were athletic and loved baseball, thanks, in large part, to the mentoring of McWhirter and Poore.

Before coming to Galt, McWhirter had played professional baseball with the AAA Toronto Maple Leafs. A catcher, he turned pro with the Leafs in 1909. His playing days ended when he hurt his arm at spring training in Macon, Ga. And Poore, said the late Jack Murphy, gave everything he had to the boys and local baseball.

In the 1930 Intercounty championship, Larkin hit a home run to lead the Robin Hoods, scoring Barnes who had been on third. Larkin also had a perfect day in the field with three putouts.

It was a banner day for the entire Galt nine. Everyone had at least one base hit, while Larkin, Barnes, Lovegrove and H. Bennett had two apiece.

Following that win the Robin Hoods chased the Ontario title, bringing their first Ontario Jr. championship to Galt on September 25, 1930. The team had a 21-1 won-lost record on the season, one of the most dominant performances ever by a junior team.

In 1931, as defending champions, the Robin Hoods were eliminated from the provincial playdowns when they dropped a close three-game series to Toronto Columbias in the semi-finals.

That loss in the semis sat with them during the long winter of 1932, and as they prepared for the 1932 season, they were a determined lot.

Upon winning the Intecounty title for the fourth straight year, they advanced once again to the Ontario playdowns, downing all opponents including the Toronto squad.

They faced London in the finals. By then it was late September and the annual Fall Fair had come and gone, so the field at Dickson Park required some work before it was playable.

After dropping the first game on the road, Galt beat London 5-2 in the second game to force a third and deciding game. That contest was to have been played on a Wednesday in Ingersol but was postponed due to the unexpected death of Larkin’s father. The London team, in a gesture of sportsmanship which was appreciated by the Galt organization and fans, agreed to the postponement.

It would be do-or-die for both teams when they met at a neutral ballpark in Ingersol. It was early October, and the air was cool. A cavalcade of automobiles from both Galt and London descended onto Ingersol for the championship game. All told, there was a paid attendance of 1,032 spectators to watch the Saturday game.

Galt won the coin toss to gain home field advantage. From then on it was all Galt as they posted a 17-6 rout over the London squad.

The local juniors were bringing home their second Ontario junior trophy in three years. But back home in Galt, where the Galt Kiltie Band had made preparations, win or lose, to have a small parade and celebration to greet the Galt players upon their return, their careful plans had gone awry.

It was not due to anything the Kiltie Band had done. They were ready and waiting at 6:30 p.m., along with a large crowd at the Market Building for the team to arrive.

But after winning the trophy, the Galt team decided, at the last minute, to stop at Woodstock on the way home to get supper. Meantime, the Kiltie Band members and local fans waited patiently. But as night drew on, and with no sign of the team, many of the band members had to leave to fulfil other commitments, including a few who had to play at Galt Arena that night. After a while, the crowd dispersed.

Only a few diehards waited it out to greet the team upon its arrival at 8:30, two hours late. The parade and celebration was a letdown. Still, the next day’s sports section of the Galt Evening Reporter proclaimed, in an eight-column headline across the entire page: “Robin Hoods defeat London for 2nd OBAA title.”

Everyone loves a winner, and the Robin Hoods epitomized a winning baseball team. Two years earlier they had posted a 21-1 won-lost mark; this time around they were 26-4. There were none better in the junior ranks in Ontario, and perhaps in all of Canada.

The Great Depression would last for the better part of the next decade, and then a war would come. But long would baseball fans talk of those memorable Galt payers who rose to the top echelons of junior ball. Years later fans would tell the tale of the Galt Robin Hoods and their incredible four-year run.