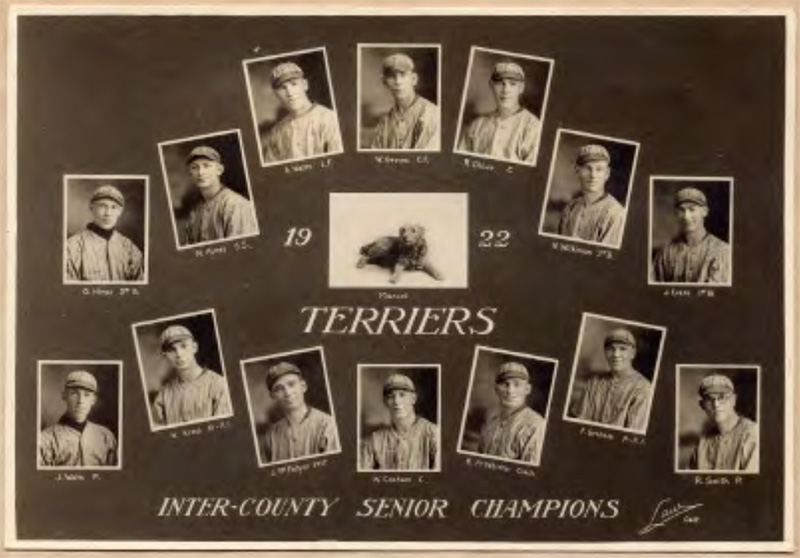 En route to Galt’s first-ever Ontario baseball championship the Terriers opening opponents were also their most difficult ones. The Guelph Maple Leafs had won the Intercounty title three years in a row but lost to Galt in what the local newspaper described as a major upset. In that series a familiar pattern unfolded: Galt won the deciding game with a comefrom- behind vic- tory. A five-run ninth inning gave the Terriers the Intercounty championship on September 9, 1922.

The 1920s were a much different time for local sports teams. Fan sup- port was overwhelming. “Dickson Park,” according to the Galt Evening Reporter, “presented a wonderful sight Saturday with the grandstand and hillside taxed to capacity, and automo- biles lined up at both the north and south ends of the field and on top of the hill.” Later, it was noted how the game impacted the community: “…busi- ness in Galt is completely suspended over the ball game.”

The Terriers first series in the Ontario Amateur Baseball Association (OABA) playoffs was their only easy one as they defeated Oakville in two games, scoring 31 runs. Galt then beat the St. Thomas Shamrocks in three games after dropping the first contest. The final series was against the Belleville Grand Trunks, and the entire town was in shock when Belleville won the series opener at Dickson Park with four runs in the ninth inning. Terrier fans had been worried when, the day before the first game, star pitcher Friendy Graham injured his pitching arm at practice. Graham recovered in time for the second game and pitched Galt to a 4-3 win in Belleville.

Game Three was played at a neutral site, in Guelph, with special trains carrying Terrier supporters to the Royal City. As was their custom, Galt trailed throughout most of the championship game. Normie Himes’ three- run homer in the seventh inning finally gave Galt the lead. That night, on the evening of Oct. 25, 1922, the team paraded down Main St., proudly displaying their purple and white championship banner.