Of all the time-honoured traditions that have graced communities across Canada, none is more exciting than the annual public school skating races in Galt. And no one has come to symbolize the races more than longtime race starter George Heggie. 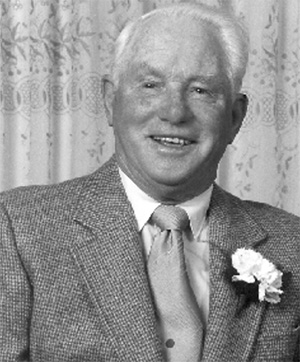 The late Heggie, who helped inaugurate the races in 1931, was the race starter for more than six decades, from their start to 1989, with the exception of a few years during World War II. Heggie, who was wounded in France during those war years, is remembered by generations of locals, standing behind the starting line with his official wooden clappers in hand. He is symbolic of the yearly mid-winter ritual.

Heggie, a fine athlete in his own right, was a superb shortstop for the Galt Terriers and quarterback for the ORFU Galt juniors. When his playing days ended he served as coach and later president, of the Galt Minor Baseball Association. One of the founders of Little League baseball in Galt, he was also an active curler and was on the organizing team of the Provincial Brier, as well as being the founder of the Tri-County Masters Curling League. For all of his community work he was named Cambridge sports contributor in 1982, being presented with the Don and Benita Rope Award. 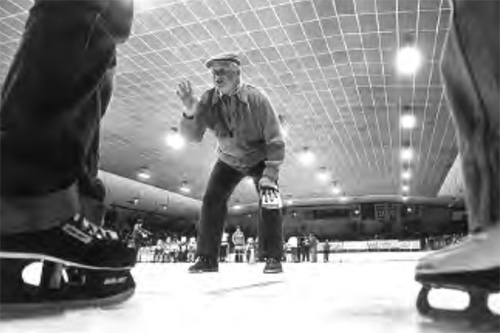 An ardent member and advocate of the YMCA, Heggie always took an active role in the community. A case in point was in 1947 when he served as athletics coordinator for the Old Boys Reunion. But that was just the tip of the iceberg. His lifetime contributions to sports in Cambridge exemplify how athletics improve the spirit of the community.

Much has changed since 1931 but the atmosphere in Galt Arena Gardens remains the same on skating race night each year.  If you go into the arena and close your eyes you can still imagine George Heggie in his crouched starting position, school colours adorning the children, raucous cheers reverberating from the four corners of the arena, and the heightened anticipation of wide-eyed youngsters at the starting line – CLAP!