He was unquestionably the greatest hitter the Senior Intercounty Baseball Association ever saw, yet Gord Bradshaw, or Brad, as his friends called him, never got a big-league contract.

In 1930 there was probably no better hitter in America than Gord Bradshaw of the Galt Terriers. He was 21 years old that summer, new to Galt, big, strong, and poised to hit .698. In the long and storied history of the Intercounty, no one has ever come close to that mark. Others have hit well; some have even hit over .400, but no one has threatened n Bradshaw’s record.

The late Stan Markarian, Reporter sportswriter, wrote that Bradshaw’s batting record was one of the most incredible achievements in amateur baseball.

Growing up, the oldest of 12 children to Red Bradshaw and his wife, Gord was regarded as the best ball player – softball or hardball – in Brantford.

His younger brother Doug, now deceased, was also a ball player who played for the Brantford Red Sox. He looked up to Gord as almost a second father.

“I was a fair ball player but I wasn’t as good as him. He was outstanding.”

So was pitcher Beaner Pickering, or Stan, as his mother called him. The two Brantford boys were inseparable. They were called the “Boy Battery” with the Red Sox. Wrote a Brantford sportswriter: “His work thus far has been the outstanding feature of the local team. Without making Brad’s head swell, it must be admitted he has all the earmarks of a big-leaguer.”

The Terriers obtained Bradshaw and Pickering from the Red Sox in 1929. Brantford mourned the loss of their “gold-dust twins.” A Brantford sportswriter wrote that Brantford had lost its two best players.

But times were tough during that Depression year, and jobs scarce. Robert Scroggins, Terrier executive, offered job security at Scroggins Shoe for the pair.

Their impact in Galt was instant and the Terriers went on to win the league title that season. The husky Bradshaw, 5’10” and 210 lbs., caught every game that season. Pickering pitched part of the final game that gave the Terriers the title. Galt beat the Toronto Native Sons.

“The highly-touted Bradshaw,” wrote a Toronto sportswriter, “who the Leafs (International League) are after, made good with a vengeance. In his first appearance at the plate he drove one far over the right field fence. He also drove two fouls out of the grounds and showed up well behind the plate.”

In 1930 Bradshaw won the Arthur Halle Trophy as the league’s most valuable player. He also won the Oscar Hett Trophy as the league’s leading batter. Galt won the Ontario title that season.They did it again in 1932, and their victory was followed by a dinner at the Iroquois Hotel (at the corner of Main and Wellington Streets), with a parade after- wards. 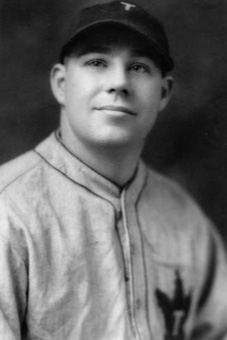 Bradshaw had missed several games that season with a broken finger, though his .698 average was something not easily forgotten. Teammate Claret Hoffman was second in batting with a .400 average.

Even in the OBA playoffs, Bradshaw hit .500 and the pro scouts were watching. Charles Good wrote that Baltimore had offered Bradshaw a contract for the 1931 season, and the Leafs, said scout Bill O’Hara, wanted the talented catcher.

Oscar Hett, longtime umpire and a big Bradshaw booster, thought he had all the tools. Good reported that Hett thought “Bradshaw had very little to learn and should be ready to break into fast company after one trip around the (International) circuit.”

Former Brantford Rd Sox president Larry Pennell said that he remembered Bradshaw well and that he “would have made professional baseball at the upper levels without a doubt.” Said Markarian: “Naturally as a baseball buff from Detroit (visiting Galt in the summer of 1930), I was anxious to see him.” What he saw amazed his 16-year-old eyes. He watched every move he made, and was spellbound. He turned to his friend and asked why Bradshaw wasn’t playing pro.

Hett had arranged a tryout with the Leafs, but Bradshaw never saw the letter the Leafs sent to him via the Terrier executive.

“I’ve seen guys catching in the major leagues, even today, who couldn’t carry his jockstrap,” said Doug. “He was that great.”

Bradshaw never got a chance to turn pro, so we’ll never know what might have been. But he was actively involved in local sports, playing industrial hockey and softball and playing for the Terriers. He even turned to coaching in the mid-1930s, while still playing.

In the spring of 1949 he took the helm of the Galt Terriers until playing coach Tom Padden arrived from New Hampshire.