Given that Gord Renwick has always had a passion for baseball, most observers would find it surprising that he rose to the highest levels of the international ice hockey world. 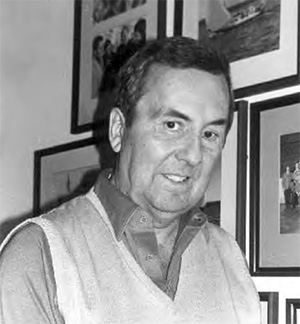 But Renwick, one of the original build- ers of the formidable Galt Hornets senior hockey organization –– the organization was described as the best outfit in senior hockey circles –– has spent much of his adult life fighting for hockey.

His hockey service was all voluntary, but the impact he made was major. “I probably get a lot more credit than I deserve,” the soft- spoken Renwick says. “What stimulates me to do it is the love of the game and the suc- cess of marketing.”

Through his administrative career Renwick has chaired the Royal Bank Wrigley International Tournament, was instrumental in organizing the prestigious Wrigley Midget Tournament, and served as Chef de Mission for all visiting Russian team tours of Canada. 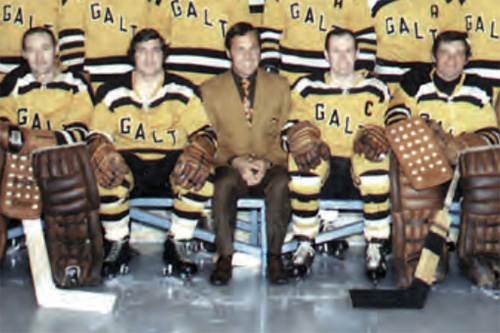 As a byproduct of his service he counts as a good friend such foreign luminaries as Vladislav Tretiak, Russian hero of the 1972 Summit Series.

In addition, he administered the marketing team, getting international sponsors for the IIHF and playing a major role in the Canada Cup and World Cup tournaments. Owner of Renwick Construction Ltd., Renwick, when he was serving as IIHF vice-president, typically spent a good portion of each year circling the globe on hockey business. He handed out the medals at the 1992 Olympics, taking no joy in placing silver medals around the Canadian players’ necks after they lost the goldmedal game in a shootout. Later that year at the world championships, when he placed the gold medal around Paul Kariya’s neck, Kariya said: “I knew if I hung around here long enough you’d give me a gold medal.”

He retired from the IIHF after serving the orgranization for 20 years – he was with CAHA from 1969 to 1993 – Renwick came to know people at the highest level of organized hockey, both amateur and professional.

But more importantly, he was universally respected. “International hockey broadens your horizons as you meet and make new and interesting friends,” he said.

The Renwick Cup, awarded annually to the AAA senior ice hockey champion, was named in his honour.

A life member of the IIHF and of Hockey Canada, Renwick enjoyed spending time with family and friends at his cottage in Muskoka on Lake Rosseau.

He was instrumental in helping the Cambridge Sports Hall of Fame get off the ground in the mid-1990s; when he returned from the Nagano Olympics he donated a few items from the Games to the Hall, including a game-worn Eric Lindros Team Canada jersey and a lacquered puck from the artisans in Nagano. When Craig Campbell from the Hockey Hall of Fame visited the inaugural Cambridge at the Olympics display in the winter of 1996, he was stunned to see the lacquered puck from Nagano.

“Where did you get that puck?” he asked. We told him Gord Renwick had brought it back for us personally.

“We’ve been trying to get one of those pucks for the Hockey Hall of Fame,” he lamented, “and the Cambridge Sports Hall of Fame has beaten us to it.”

It was all thanks to Gord.

Renwick rose to become vice president, in 1984, of the International Ice Hockey Federation (IIHF), a post he held for 12 years. During that time he helped take the IIHF from a kitchen-table approach to bookkeeping to a computerized operation. He also headed the Statutes/Bylaws Committee and the
Rules Committee, helping to bring uniformity to North American and European hockey.