Regarded as one of the greatest athletes to ever come out of Galt, Harris Legg could do it all on skates.

He began as a speed skater, honing his skills on the Grand River ice in winter and at Galt Arena Gardens, and rose to the top, qualifying for the 1936 Winter Olympics. Like all speed skaters in those days, he was expected to pay his own way to the Games, so he never went. Instead, he joined the American-based Ice Follies and began thrilling crowds throughout the world.

Legg was an accomplished cyclist, riding from Galt to Lake Placid in the early 1930s to compete in his first Silver Skate speed skating competition.

As founder of the Galt Speed Skating Club, Legg encouraged many youngsters to take up the sport.

As a high school student at Galt Collegiate he was a champion marksman, captaining both the rifle-shooting team and the gymnastics squad. Years later he donated a trophy, in his name, to GCI’s annual rifle-shooting champion.

Prior to his career with the Ice Follies he became famous in southern Ontario and in the northern U.S. for his trick skating, especially his barrel-jumping, something he honed to perfection on the river ice above the dam each winter.

Legg, who retained his U.S. citizenship after coming to Galt as a young boy from New England – he was a descendant of writer Nathaniel Hawthorne – served in the U.S. Navy during the Second World War, spending most of his time in the South Pacific.

He returned to the Ice Follies after the war, resuming his stilt-skating performances with his wife, Phyllis, and improving his revolving hoop circle-of-fire manoeuvre.

By then he was firmly entrenched as the star performer of the Ice Follies, and gained wide acclaim.

He also set a world barrel-jumping record, at the Boston Garden, after the war.

Legg retired from the Ice Follies in 1957, a year after making a triumphant return to Galt for the figure skating club’s annual ice show. Presented with a key to the city, he was given a warm reception. While he was here, staying with his parents George and Maud, the mayor of San Francisco sent Legg a telegram congratulating him on his return home. 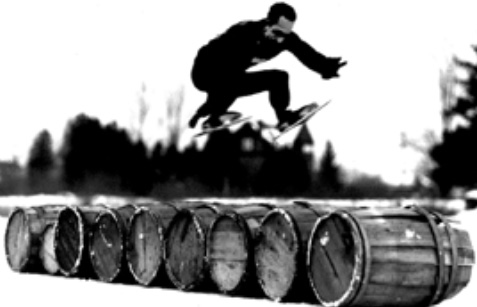 Following his retirement the Leggs operated a couple of skating rinks in San Francisco. He also served on the organizing committee for the 1960 Squaw Valley Olympics.

He loved speed skating all his life, and counted among his friends Olympic legend Eric Heiden.

Legg and his sister Mildred were arguably the best brother-sister speed skating combination the country ever produced until Kevin and Cindy Overland came along – ironically enough they were out of the Cambridge club – three generations later. Legg, as a 70-year-old, was still fit, still vital. He rode his bicycle, alone, across North America in the summer of 1981, arriving in Cambridge from San Raphael, California.

He and Phyllis retired to Florida and spent many good years there. He died in Florida in February of 1996.