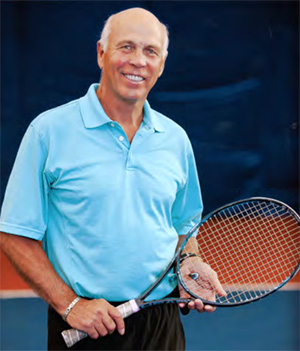 The Greenan name is synonymous with tennis in Cambridge, and it all started with Harry Greenan. In 2011, he won A Tennis Canada Excellence Award as the TPA Coach of the Year Award Greenan not only groomed a number of local players to national and international prominence, but has long been recognized as a Canadian coaching legend.

He was at a bike rodeo at Dickson Park when he heard that one of the prizes was free tennis lessons, and it was at the Galt Tennis Club at Soper Park, under the tutelage of Don Rope, that he got his start.

“Don got things organized at the club,” he says. “He was really the only coach I ever had.”

As Greenan developed and could compete against Rope, the two became doubles partners, winning a few tournaments. “He was so competitive,” says Greenan. “I learned a ton of stuff from him.”

Greenan, the eldest of three boys who all would go on to play competitive tennis, started playing the game at 13. In the years since then, it was Cambridge’s blessing that he not only came to town as a youngster, but stayed here. His presence made Cambridge a hotbed for tennis, and he had a major hand in producing many national and international-calibre players.

But in those early years, soccer was his passion, and it wasn’t until he was 15 that he began entering tennis tournaments. “At 13, I played on the Preston Queens senior soccer club, and we travelled a lot, and practiced twice a week. By the time I was 15 I was getting tired of staying in the car when my older teammates went into the bar after the games.”

So he turned to tennis. He began to make his mark early, ranking in the top 10 in Ontario U18 at the age of 17.

Soccer, he believes, gave him an advantage in that he knew how to com- pete. Wanting to be competitive was a skill that transferred from one sport to the other. “That’s something I tell the young players I coach, that doing anything at a high level — another sport, or even music — will transfer to tennis.”

What was it about tennis that he loved? “It’s an individual sport and you can’t blame anyone but yourself. It takes a combination of mind and body to do well at tennis. It’s like a game of chess on a tennis court. You don’t have to be the strongest or the fastest.”

With Rope’s competitiveness, always seeking to play against better opponents, the two entered a league in Toronto one night a week. “It was often pretty tight to get there, and we’d have to rush right onto the court.”

Throughout the 1970s he was ranked as high as third in Ontario in the open division.

Clearly, tennis had become his passion, and he has been heavily involved in the sport for his entire adult life.

In 1983 he won the over 35 national singles title as well as the doubles title, and the next year was the national over-35 indoor singles champion .

A decade later, at an age when many others may have been slowing down, Greenan was still at the top of his game, winning the over-45 Eastern indoors title in 1993.

By then he was firmly established as one of the top tennis coaches in Canada. The influence he had on his son Mark, who would go on to become one of Canada’s greatest doubles players, was inestimable.

As a youngster, Mark began dragging a tennis racquet around as soon as he could walk, often accompanying his father and Don Rope – the two were good friends in addition to doubles partners – to various tournaments.

Both Greenan and Rope were heavily involved in the Soper Park club for years.

Harry’s induction into the Cambridge Sports Hall of Fame this year follows the earlier induction of his son Mark.

Harry became a course conductor to present level 1,2 and 3 certification courses in 1974 and was a Head Course Conductor for 27 years for Tennis Canada.

His lifetime of experience has told him that the road to success is never an easy one. “Nor should it be,” he says. “There are always doubts, and injuries and below par performances. That’s just part of life and that’s what makes it sweeter when you have some success.”

He was also chairman of the professionals committee and vice president of the Ontario Tennis Association for many years.

With a level 3 coaching certification, for two decades he owned and operated his own club in Cambridge (1979 – 1997), and today is part owner of the Royal City Tennis Club in Guelph.

The OTA regards Greenan as “one of these coaches that qualifies as a great Canadian Coach.”

In an article headlined “Harry Greenan: Champion Maker,” the OTA went on to say: “Year in, year out he has developed some of the top players in this country.”

In the article Greenan reveals one of the mainstays of his tennis advice: to play with and against the best players possible. “I believe it’s imperative to be challenged to perform at the highest level.”

Greenan mentions several local players he coached who not only developed into good tennis players, but have gone on to distinguish themselves as coaches. “I’m proud of these guys.” The list is long but includes players like Derrick Racine, who coaches Division II at West Florida; nephew Daryl Greenan, who coaches Division I at Mississippi State; Steve Barsby at Georgia Tech; Steve Adamson, who runs his own program at San Diego; Joey Scrivano, head coach at Baylor in Texas, and Dave Anderton, who coaches in L.A.

“I’m a firm believer that you are your own coach in life and there will be many people who will come into your life you will learn from.”