Few figures in local sports carried as much renown as John James “Tiny” McFadyen did in Galt in the first part of the 20th century. He was one of the town’s best-known sports figures and promoters who rose to the top of amateur hockey as president of the Ontario Hockey Association in 1948-49.

McFadyen was instrumental in helping Galt rise to the top in amateur baseball circles in the early part of the 20th century. His efforts, coupled with those of men like Bush McWhirter and Laurie Poore, among others, helped Galt become a hotbed of baseball talent.

As manager, he saw the Galt Terriers baseball club win Ontario Baseball Association (OBA) senior titles in 1922 and 1923. They returned to the Ontario finals again in 1924, but were defeated that year by the Toronto Oslers.

Within a decade, the Terriers, under the direction of his protege, school teacher Dode Hoffman, repeated as league and provincial champions in 1930 and 1931.

He was heavily involved in bringing Junior A hockey to Galt. When the Galt Junior A Red Wings were moved closer to home by their parent club, Detroit, Tiny helped negotiate a deal with the Chicago Blackhawks to bring a Junior A team to Galt. But his interest in the two sports — as a youngster he played against older children and thereby gained the nickname Tiny — wasn’t confined to Galt.

He was a key member on the executive of the OHA for years and was president in 1949-50.

He served alongside of W.A. Hewitt, the longtime secretary of the association who was the father of Foster Hewitt, widely known for his Toronto Maple Leaf hockey broadcasts. The two were good friends.

During his tenure as president of the OHA, Tiny officiated at the opening of are- nas in Guelph, New Hamburg and Simcoe, and presented the OHA Junior B trophy to Lloyd Gross, coach of the 1948-49 Kitchener champions.

McFadyen wasn’t averse to telling officials to clean up the game. Speaking to officials at a Toronto meeting he said: “People are getting sick and tired of the way things are going today — the charging, the boarding and the high sticking. I’ve been besieged by telephone calls, letters and just lapel-nabbers who complain bitterly about the hockey we’re giving them.”

In the end, the referees agreed they should clamp down on the offenses Tiny listed. 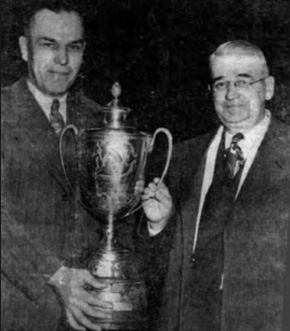 In addition to his hockey connections, he also served on the executive of the Inter-County Baseball Association for many years. Indeed, he was vice-president of the league when he was required, due to health considerations, to retire as a sports promoter, declining the Inter-County presidency.

Said Reid (Speedy) Oliver, who played for McFadyen in those early years: “There was no better manager than Tiny around.”

McFadyen brought McWhirter in to coach the team, and then brought in catcher Gord Bradshaw from Brantford when Oliver retired.

Said Kitchener’s J.W. Scott, former president of the OBA and the Inter-County Baseball Association: “He was an outstanding coach and executive.”

McFadyen was, added Scott, a real good catcher in his day, as well.

Although he spent a good deal of time promoting sports, he was also heavily involved in other community endeavours like the Alma Lodge. He was a member of Central Presbyterian Church, a charter member of the Galt Lions Club, and a member of the Waterloo County Golf and Country Club.

In 1952-53 he was chairman of the industrial section of the Galt Board of Trade, served on the Family Service Bureau and rose to become plant superintendent and then plant manager of Galt Malleable Iron. He also served as Canadian representation.

Gazette, wrote that “Tiny was one of the most dynamic executives to ever make a contribution to hockey and baseball.”

He was well liked. Added Campbell: “Tiny was one of the best men the OHA ever had in the 1920s. Ivan Miller of the Hamilton Spectator said that McFadyen was “a great and constant worker in the cause of amateur sports in the province.”

Respected as a gentleman and sportsman, his contributions were many to the sports life of both the province and the community.

It was Chick Appel, a sportswriter for the Stratford Beacon-Herald who perhaps summed McFadyen up best. Said Appel: “He was that type of man you had to like the first time you met him. As a sports legislator he had few equals. Any sports organization that had him on the executive or advisory board was bound to be well administered.” J.J. ‘Tiny’McFadyen, above, and at the immediate left, was president of the Ontario.