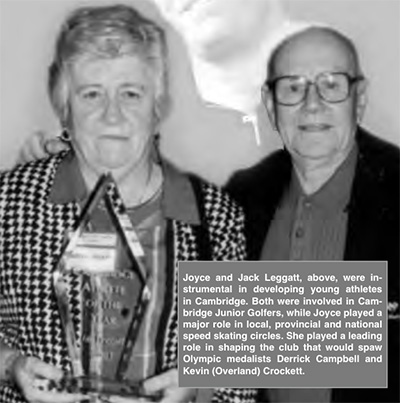 Through several decades Joyce and Jack Leggatt were involved in the sporting fabric of the community as builders.

Joyce’s involvements centred on speed skating, while Jack’s centred on junior golf. The two came to Canada from Scotland – Joyce in 1953, and Jack in 1964 – and, except for a twoyear period (1970-72) spent in the Transvaal, South Africa, they have remained here ever since.

Joyce began her involvement with the Cambridge Speed Skating Club as secretary – she was later its president – and eventually rose through the administrative ranks to become vice- president of the Canadian Amateur Speed Skating Association (now called Speed Skating Canada).

Joyce became involved in speed skating in the fall of 1972. The Cambridge club was started in 1973 when they were given ice in the Karl Homuth arena.

Through the years, as their son Eion took to the sport, both Jack and Joyce volunteered with the club.

Partly through her tireless efforts, the Cambridge Speed Skating Club became one of the top clubs in Canada, producing several Olympians, including gold medallist Derrick Campbell, and bronze medallist Kevin Overland, and a host of Canadian champions and medalists.

She continued her involvement with the Cambridge club for the next three decades. Along the way she also served as presi- dent of the Ontario Speed Skating Association for a decade. As of 2002, she continues to be involved with the provincial asso- ciation as vice-president of development.

Both Jack and Joyce have been involved in the Can-Amera Games since the beginning, in 1972.

Joyce has been a longtime member of the Cambridge Can- Amera Games committee, and the Cambridge Sports Awards, which annually selects the Tim Turow Cambridge athlete of the year. 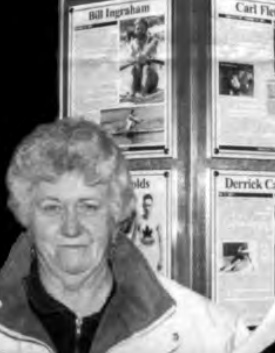 The couple have also been involved for 14 years with the Top Flite Junior Golf Tour, and Jack has been chair of the Puslinch Junior Golfers for 22 years.

Joyce received the Woman of the year Award in 1994, Special Achievement Award 1991 from the Province of Ontario, OSSA Award of Excellence in 1991, and the John Hurdis Award from Speed Skating Canada in 2001. She also received the Recognition Award from the Amateur Speedskating Union in 1996.

Jack received the Canada 125 Commemorative Medal for his contri- bution to sport in 1991.

“The greatest enjoyment that we get out of our work,” says Joyce, “is seeing the achievements of the young athletes that we have been involved with, and hoping that we may have made a difference in their lives.”

She counts her trip to Japan to see Campbell and Overland win Olympic medals as the highlight of her speed skating career.

Unquestionably, their greatest golf highlight was watching their son Eion (he would change his name to Ian to avoid the constant mispellings once on the PGA Tour) win the PGA Tucson Open in the spring of 2002. Eion was an All-American at Texas Wesleyan University – he attended from 1986 to 1989 – and one of the top golfers on the Buy.com Tour in 2000.

Says Jack: “Junior golf has played a big part in both our lives. We look back and think of the golfers who came through the program who are teachers, accountants, club golf professionals, surgeons, and golf professionals on the Canadian Tour and PGA Tour.”

Joyce sums up their long involvement in sport this way:

“Both of us love sport and what we are doing. “It is great to be involved with the youth. Maybe someday we will retire but not as long as we are needed. We plan to keep going, hopefully for a long time.”