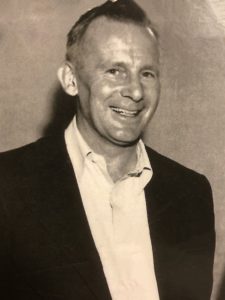 When Cambridge’s Jim Law was inducted into the Ontario Lawn Bowling Association Hall of Fame in 2018 under the Legacy category, he was widely acknowledged as one of the finest lawn bowlers in OLBA history.

Law was born in Galt in 1912 and attended GCI but left before graduation. The story of his departure from GCI was similar to that of another Hall of Famer, Dr. Harry MacKendrick. In MacKendrick’s case, headmaster Tassie chased him out of the school. In Law’s case, so the story is told, it wa

s principal T.H. Wholton who chased Law out of the school – the Dando Street exit to be exact – and Law never returned.

He was a lifelong resident of the area. He owned and operated Law Cartage Ltd. of Cambridge, but it was as a lawn bowler that he earned distinction,  winning 10 provincial and four Canadian championships. His achievements in lawn bowling were previously recognized by his induction into the Waterloo County Hall of Fame.

Law, whose career spanned more than four deacdes from the 1950s on, was one of the most prolific winners in the annals of the Ontario lawn bowling circuit. His career of district championships spanned from 1956 through to 1991

His dominance in Fours was outstanding, accounting for 21 districts, eight Ontario and three National Titles.

Jim was a mentor for both Bill Boettger and George Boxwell as they moved up the competitive ranks of bowls. Jim also was very forthcoming to anyone who wished to learn the strategy of the game which, at the time, was considered very generous. Jim also established the Galt Sportsman L.B.C.

Fellow lawn bowler and friend Dave Burrows, who knew Law from the 1960s on, said that “Jim was always helpful to others who wanted to learn from him. He was also the winningest fours skip of his day and was able to save games, provide back bowls, drive his own jacks, and help his team in many ways. He was just modest about it.”

“Joe has one strategy,” replied Law. “That is to use his final bowls if necessary to drive the jack into the ditch to score. Therefore, when I play Joe, I instruct my lead to play their first bowl as close to the ditch as possible without going in. Joe usually gets a bit depressed after that.”

Burrows also recalled asking Law how important the skip is to a team in fours.

“The skip is the least important player on a fours team,” said Law. “If a skip is down when he comes up to play each end, you will lose the game anyway!”