In the fall of 1990 Jason Mulholland was the star player on the talented Galt Collegiate senior boys volleyball team and was a big reason the Ghosts went undefeated (54-0) and captured the all- Ontario OFSAA championship that season.

That year he was named to the Fabulous 50 Preps list by Volleyball Magazine.

In the ensuing years Mulholland would go on to star in the most competitive of volleyball environments – Southern California – where he once again showed his dominance.

Mulholland was courted by several NCAA schools during his final year at high school, but chose the University of Southern California (USC), a school known for its acclaimed academic pro- grams and also for its outstanding athletic department.

GCI coach Rob Atkinson knew Mulholland was eager to face the top players in the NCAA.

“There was always a strong desire within Jason to compete against the very best,” he said. 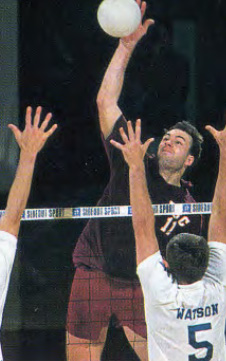 His first year at USC met everyone’s expectations, including those of head coach Jim McLaughlin. McLaughlin, who helped coach the USA Olympic team at Barcelona, said Mulholland was a rare breed of athlete.

“We didn’t really classify him as a freshman (his first year),” he said after Mulholland’s first year was over, even though he was named one of only six members to the Freshman All-American team. “He’s going to be one of the best players in the league, if not the best.”

Mulholland would prove McLaughlin’s prediction right on the mark as he would go on to be named All-American and was one of the finalists for Player of the Year.

Even as a freshman, Mulholland had the ability to dominate a game. Said McLaughlin: “He did everything we asked of him, and we asked a lot. He’s up for any challenge.”

By his fourth year Mulholland had improved his backcourt game to such a degree that he was called a great all-around player capable of dominating a match by “hitting rockets, blocking tough, passing accurately and digging lots of balls as well as serving consistently tough.” 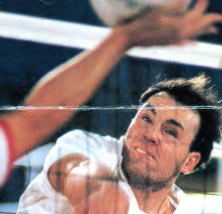 He also tied an NCAA match record with 55 kills against Cal State Northridge in a four-game match and, as his final season approached, was acknowledged as one of the finest players in the NCAA. “Jason is one of the best players in the country, if not the best,” said his coach, who led USC to the national title in 1990.

Mulholland, at 6’7″, was the best swing hitter in college volley- ball and was one of the leading candidates for Player of the Year honours. In his third year he hit .386 with 551 kills, 153 digs and 81 blocks while ranking fourth nationally in kill average (6.98).

Mulholland was also named to the 1995 All-International all-star team, a team that included NCAA standouts from Germany, Israel, Mexico, the Czech Republic and Brazil.

Following his career at USC he played pro in Turkey, before finally settling back in Cambridge.