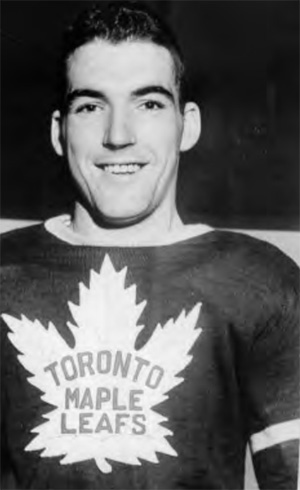 Who was Jerry Connell? Some remember him as one of the top all-round athletes to come out of Hespeler.

Connell was born in Kincardine but came to Hespeler early, and grew to be a fine young athlete. His two big sports – lacrosse and hockey – were where he made a name for himself, though he also excelled at football and virtually any sport he turned his mind to. Big, strong, talented, he was a hero to Hespeler youngsters. He represented all that they aspired to be.

So it was with Bob Roos, who was several years younger than Connell. Roos’s father, Alf, was heavily involved in provincial lacrosse circles – he served as president of the Ontario Lacrosse Association (OLA) in 1927 – and took the fatherless Connell under his wing.

Lacrosse was a thriving sport in Ontario earlier this century, and Hespeler was a hotbed. Several generations of Hespeler lads grew up playing lacrosse, and traveling to other communities to uphold Hespeler’s strong reputation in the sport.

Connell excelled at lacrosse, and there are some who maintain that he was better at lacrosse than he was hockey.

But Toronto Maple Leaf boss Conn Smythe was impressed with Connell’s hockey ability, and signed him to a contract about 1938. Back then the Leafs held their annual training camp at Galt Arena Gardens. The players all stayed at the Preston Springs, and held dry-land training at Riverside and Soper Parks.

Connell’s future was full of promise, and Smythe fully expected to see him wearing a Toronto Maple Leaf jersey before the 1940s began. He had all the earmarks of a professional, and liked playing hard. As a defenseman, he was tough on opponents. “That was the only way he knew how to play,” wrote a sports reporter at the time.

He had played junior hockey for Preston, then skated for the Waterloo juniors. From there he had gone, at a young age, to play for the highly-regarded Port Colborne Sailors Senior A team.

That’s when he impressed Smythe, and the Leaf boss then sent him to their farm team, the Syracuse Stars. It was said that the Leafs planned to bring him up to the big team the next season.

In the summers, Connell moved up the ranks in lacrosse, playing juvenile for Hespeler before going, at age 17, to the Cornwall senior team. He then played for the Fergus Whistles before spending a couple of seasons with the Orillia Terriers of the OLA, where he helped them to a couple of Canadian titles.

In the summer of 1938, Connell’s Orillia Terriers were involved in the OLA final series against St. Catharines. That’s when he broke his leg. That fall, when the Leafs came to town for their training camp, Connell motored over to Galt Arena from Hespeler to watch the Leaf and Syracuse players in action. He was picking up mental tips for a professional career that everyone assumed was his for the asking.

Earlier that year in the hockey playoffs, Connell, playing for Port Colborne, had hurt Red Heron when he hit him hard into the boards. Connell knew no other way of playing the game. Smythe wanted him on his team for his hard-hitting and dashing style of play. “He really hurts them when he bodychecks,” said Smythe. “One of the reasons I signed him is that I’d rather have him playing with our boys than against them.”

But after the Heron hit, Connell had second thoughts. “The big fellow (Connell) was so worried over the incident,” wrote a reporter, “that he just about gave up all thought of carrying on in hockey.” But he stayed in the game he loved, and ironically, he and Heron were soon to be teammates at Syracuse.

There, Connell was one of the fan favorites, but he had already won over Leaf coach Dick Irvin before going to Syracuse. Said Irvine: “He is one of the brightest prospects I’ve ever seen.”

The 21-year-old Connell had played a big part in an overtime win over Providence in late November of 1938. Four thousand fans had been on hand to watch Connell and the Stars that night, and they were pleased with what they saw. Connell had missed the early part of the season recuperating from that fractured left leg, but had made a strong impression south of the border in the week he had been active.

He’d made his start for the Stars in New Haven, and observers were saying he was the brightest prospect Syracuse had ever seen. After the game with Providence on November 22, Connell appeared to be in good spirits. Wrote one reporter: “He had handled himself well in the game and appeared in normal condition in the dressing room…joking with his teammates and coach Eddie Powers.”

Connell and Heron were roommates that year, and after a late dinner, the two retired to their room in the Onondaga Hotel, going to bed about 2 a.m. Heron was the first up later that morning, waking at about 10 o’clock.

He got dressed quickly, for they were to catch a noon train for Philadelphia. Heron reached over to Connell, who was still sleeping, to rouse him, but Connell didn’t move.

Heron suspected Connell was kidding him. He shook him, but still Connell failed to respond. Then Heron noticed his pallor, and called coach Powers.

Soon the coach, and a doctor, were on hand, and though great efforts were made to revive Connell, nothing worked. When he was pronounced dead at noon, coach Powers had tears streaming down his cheeks.

What happened? Speculation was that he died from a blood clot, or an embolism, or even a heart attack.

When Leaf general manager Frank Selke heard of Connell’s death, he immediately went to Syracuse to accompany Connell’s body back to Canada. There, the entire Maple Leaf team met the train and joined in the funeral procession on Friday at 2 p.m. from St. Andrew’s Presbyterian Church in Hespeler.

The church was filled with friends, family and fans. Rev. T.G. Marshall conducted the ser- vice, while Miss Ivy Seeking presided at the organ. Syl Apps, a pallbearer, was on hand with the rest of the Leaf players, as were representatives from clubs in Galt and Preston.

And there, too, was young Bob Roos, as shocked as everyone else was at the passing of such a fine and genial young athlete. Roos, along with a lot of other Hespeler boys, had taken the afternoon off from GCI to pay his respects.

He never forgot that sombre day when they buried Connell. “I think about him as a star who could have been,” said Roos.