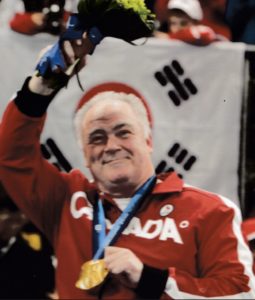 Victoria B.C. native James P. Armstrong was a highly-regarded and successful able-bodied curler for much of his career until a car accident and bad knees forced him to quit.

The accident, in 2003, literally changed the game for Armstrong.

He’d already had 18 knee operations — usually after curling season ended, so it wouldn’t interfere with his playing — and fresh from a knee replacement when the accident occurred.

The accident ended his curling career and his practice of dentistry.

Armstrong, who grew up in Victoria, was introduced to the sport at the Victoria Curling Club as an eight-year-old.

“Curling wasn’t the big sport there back then,” he said. “Hockey was. So playing it was kind of flying in the face of what was popular.”

His father, an avid curler, had grown up in Rosetown, Saskatchewan, and there, had developed a love for the game.

Although young Jim played other sports — baseball and football, among others — he always gravitated back to curling. He loved the game and showed early promise.

By the time he was 22, he had qualified for his first MacDonald Brier. Playing second for the Jack Tucker rink from BC, they finished 5–5 at that 1973 Brier. The next year Armstrong skipped B.C. to a third-place Brier finish.

After completing his undergraduate degree from the University of Victoria, in 1975 he graduated from dental school at UBC, and set up practice in Vancouver.

Dentistry allowed him to set his own schedule, often around curling, which was “one of the joys of dentistry,” he says. His patients  — many of them curlers — were understanding.

It would be nine long years before he competed in another Brier, playing third for Bernie Sparkes at the 1983 Labatt Brier.

Finishing third, they lost to Ontario’s Ed Werenich in the semi-final.

Armstrong and the team were back again at the 1984 Labatt Brier in Victoria, and finished at 6–5.

A return appearance in 1987 saw them come very close to winning it all, losing out in the final to Ontario’s Russ Howard.

Armstrong, among the elite curlers in the country, would joke about seemingly being a stepping stone to those rinks that, after beating him, went on to win a world title.

Five years later Amstrong played in his final Brier. It was 1992 and he skipped the B.C. team to a 5–6 finish.

That would have been enough, for most curlers, on which to hang a career. And what a career.

In 1990, he was inducted into the Canadian Curling Hall of Fame.

His accomplishments didn’t end there. He had won the Ross Hartstone Award at the 1983, 1987 and 1992 Briers for being the most sportsmanlike player as voted by the other athletes.

Then came the accident in 2003. It was a devastating blow, ending both his curling career and his dental practice. “I’d been struggling with the knee surgeries,” he says, “but the accident left a huge, huge hole in my day-to-day life. I couldn’t even go back to the rink.” Rinks had been his second home for most of his life, but now it became too painful to enter that realm. He loved the sport, but for the first time, was unable to play it.

Then, about 2008, he was invited back to the sport as an advisor to Team Canada’s wheelchair curling program. Longtime friend Gerry Peckham, an ex-teammate and Canadian Curling Association’s High Performance Director, extended the invitation. It was just the right thing, at the right time.

Armstrong took to wheelchair curling, which was then in its infancy, as a way to get back into the game. “It gave me an awful lot of my life back,” he admits. But it was a different sport from able-bodied curling. “There’s no sweeping, and you can’t throw the big, heavy rock.”

He skipped BC to National Championship titles in 2008 and 2009, and in 2009 skipped Canada to its first World Wheelchair Curling Championship gold medal. But life dealt him another blow in 2009 when his wife of 29 years died of cancer at a young age.

Curling, his mainstay, was one of the things that allowed him to keep it all together. And, following on the heels of that tragedy, came one of the highlights of his life the next year when he won gold at the 2010 Vancouver Olympics.

“The stars had to align,” he said, “to be able to compete in a Games in your own backyard, when the Paralympics were starting to come into their own. It was a full house and rockin’.”

In 2011 he moved to Cambridge, where he wasn’t long in checking out the curling facilities. He had a daughter living in nearby Kitchener, and had a new lady in his life who happened not only to be a curler, but who was a member of the Galt Country Club.

“They’ve adopted me, and the club has been very good to me.”

He won the 2011 World Wheelchair Curling Championship in Prague that year, and repeated as Paralympic champion four years after his triumph in Vancouver, winning gold at the Sochi Games in Russia.

Even after reaching the pinnacle of wheelchair curling, he’s still honing his skills. “It’s an ongoing learning curve.”

Last year another scare came when he was at Pearson Airport, before the worlds. He went into cardiac arrest. “I was dead,” he explained, “and a passenger started resuscitation.”

As the spring of 2016 approaches, he continues to rehabilitate and his strength is improving. What’s more, he’s hopeful about the future.

“I have every anticipation of going to the Worlds in Korea in 2018.”

To say the sport has been very good to him, as he does, is entirely understandable. Indeed, it’s been a lifesaver. But he too, has given much to the sport.