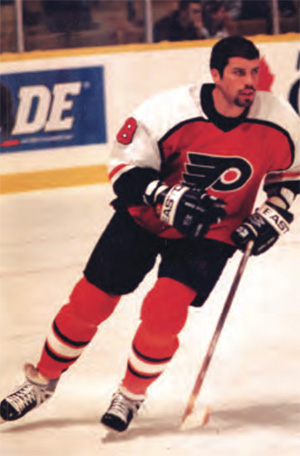 Jody Hull was the Hartford Whalers’ first-round draft pick (18th overall) in the 1987 NHL entry draft, and made his NHL debut during the 1988-89 season when he played 60 games. That season he had 16 goals and 18 assists.

Playing in the NHL was the culmination of years of hard work and effort. Hull rose through the ranks – after his time with the Cambridge Winter Hawks Jr. B team in 1984-85, the Peterborough Petes of the OHL selected Hull in 1985.

He played with Ron Tugnutt for two seasons with the Petes, as well as with Luke Richardson, Kris King, Tie Domi, Mike Ricci and Bill Huard. 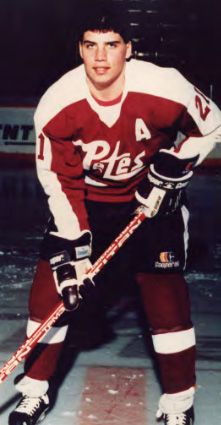 Then the Hartford Whalers made him a first-round draft choice in the1987 NHL entry draft, but before turning pro, Hull played in the 1988 World Junior Championships as a member of the gold medal-winning Team Canada.

He played in his first NHL game on October 8, 1988 against Boston, and scored his first NHL goal four days later against the Rangers in New York. The big right winger split time in 1989-90 between Hartford and their AHL affiliate, Binghamton, where he scored 65 points in 69 games – before being traded on July 9, 1990 for Carey Wilson and a third round draft pick (Mikael Nylander) to the New York Rangers.

He stayed in New York for 50 games over two seasons and was dealt to the first-year Ottawa Senators on July 27, 1992.

In the nation’s capital, Hull equaled his rookie output of 34 points with 13 goals and 21 assists in a career-high 69 games. But his time in Ottawa was limited; after just one season, he signed a free-agent contract with the Florida Panthers. There he had a plus-six rating. He played in his 400th NHL game on against Tampa Bay on March 23, 1996, and suited up for 14 of their 22 playoff games, scoring three goals and two assists. 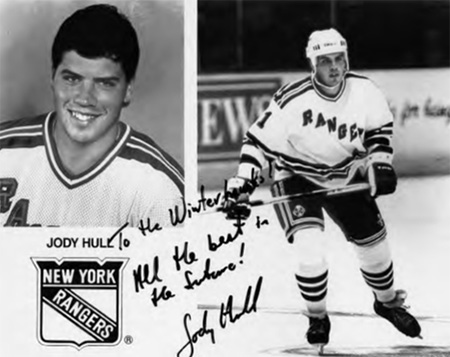 On January 26, 1998, he played in his 500th NHL game before signing as a free agent with the Flyers that fall.

On June 25, 1999 the Atlanta Thrashers selected Hull in the NHL Expansion Draft, but on October 15, 1999, Hull was traded back to the Flyers. After 16 seasons and more than 830 NHL games, it was clear Hull had proven to be a steady, durable player.
He closed out his NHL career with the Ottawa Senators in 2003-04, and played 31 games with the Binghampton Senators the following year before hanging up his skates.

In December 2012 he became head coach of the Peterborough Petes.