A Galt native, Joe Hogan grew up on Rose Street, a short walk over Mill Creek from Galt Arena Gardens. Born during the war year of 1941, when Hogan wasn’t skating at Galt Arena he was on the winter ice at the adjacent Soper Park, or on the Grand River ice above the dam, which served as a winter skating rink and hockey pad for countless Galt lads.

At 15, Hogan played his Jr. B hockey with the Hespeler Hawks in the early 1950s, and had the distinction of being

the youngest player on the team, with the exception of Bobby Hull. Hull, destined to become one of hockey’s alltime greats, had come to town and lived in Preston when he was here, was only 14 at the time.

Hull was stockier than Hogan, but both played a few games for the Galt Jr. A Black Hawks that year.

The next year Hogan went to Waterloo to play with the Waterloo Siskins, while Hull and several others went to nearby Woodstock when the Galt team moved locales.

Not long afterward, Hogan moved up to the Sr. A Kitchener Dutchmen, then played a year with the Elmira Polar Kings, a Dutchmen affiliate, before moving back to the Dutchmen around 1957.

“The Dutchmen had a pretty strong team,” said Hogan. 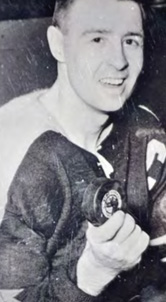 Indeed, a year earlier, with guys like the late Don Rope of Galt and Preston teacher Jack MacKenzie, the team had won a bronze medal at the 1956 Winter Olympics in Cortina, Italy.

When the fledgling Galt Terriers began operations in the 1960 season, Hogan returned to his home town to play the game he loved, helping the club win the Allan Cup in 1961.

The following year he and the Terriers represented Canada at the World Championships in Colorado Springs, Colorado.

“We were beaten out by Sweden,” said Hogan. The Terriers returned home with silver, not gold as they had desired.

“It was a big disappointment,” he recalled.

Hogan and the Terriers had been gone six weeks, playing games from Halifax to Trail, B.C. prior to the Worlds.

“We should have won,” said Hogan, “but we missed a lot of chances and there were a lot of penalties.”

It was a bitter thing for Hogan and his teammates to watch the Swedish flag be raised rather than Canada’s.

Still, time softened the hard edge of disappointment. “It felt better afterwards. It ws quite an experi- ence. How many times do you get a chance to play for your country?”

Hogan declined an offer to turn pro after attend- ing the Montreal Canadiens training camp, along with Waterloo defenseman Bill Nickel. The two skated alongside some greats during the camp, such as the legendary Rocket Richard, among others.

At the time, Hogan had put in more than three years as an apprentice electrician with Art Mills Electric, and there remained six months still to go
before he would finish. The Canadiens offered him a chance to go to Cincinnati, but Hogan declined.

“I told them I thought I’d go home and get my trade,” he said.

After his first Allan Cup with the Terriers he played with Kitchener before returning to Galt to play with the newly-named senior team, the Galt Hornets. One year later he won the scoring championship in dramatic fashion, during the last game of the season. Going into the final game he was one point behind Oakville’s Jack Price.

The Hornets hadn’t qualified for the playoffs, and went into their last game of the season, against Guelph with but one goal according to coach Earl Balfour: “There’s only one reason we’re here,” Balfour told his team. “To get Hogan the scoring championship.”

Hogan scored a goal — he beat opposing goalie Boat Hurley, who played for Guelph that year — and assisted on a Carl Hatt goal. He won the title by a single point.

As the 1960s closed, Hogan, by now the team captain, led the Hornets to a second Allan Cup. The team then toured Germany, and during the trip crossed into East Germany at Checkpoint Charlie. But the years had taken a toll on the aging player. “Mondays you’d wake up and feel like a truck had run you over,” he said. “There were a lot of younger guys coming up then and it was hard to keep up with them.”