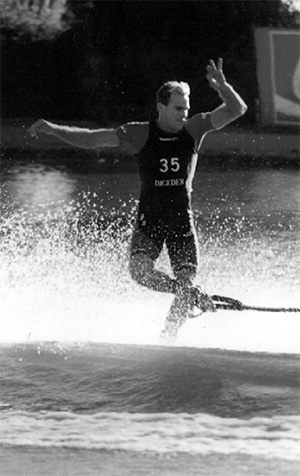 Mississauga native Joel McClintock, based out of Puslinch Lake, reached a pinnacle few ever attain when, in 1979, he won the World Waterski Championship.

Not surprisingly, he was named Cambridge athlete of the year for his athletic prowess.

McClintock has had a long history as a competitor on the national team. He skied on the Canadian national team for nearly a decade, beginning in 1977.

The McClintock Family has been world renowned for their water-skiing achievements over two generations of competitive skiers.

It all began in the late 1960′s when the first generation of McClintock’s — Joel, Jeff and Judy — hit the water ski scene, competing on National and World levels throughout their careers.

Jeff McClintock and his wife Sherron raised Jason and Whitney, both members of the Canadian National Team, who continued to compete on National and World levels, and carried on the legacy of the McClintock name in the water ski world long after the first generation had retired.

Joel’s passion for excellence extended beyond the competitive realm of the athlete. Indeed, his coaching credits are equally impressive. He coached the national team from 1987 to 1996, guiding his waterskiers to two world championship team titles.

He also served as the junior development program director for Waterski Canada and as coach of the Canadian junior national team.

He was also, in 1997 at the age of 36, one of the veteran competitors in the Cafe de Colombia Water Ski World Cup.

His expertise also extends to the realm of publishing. He wrote “The Complete Instructional Book of Waterskiing,” and produced an instructional videotape called “A Skiers Guide to Excellence.”

He went on to operate a year round water ski resort program for begin- ners through experts at the Palm Beach Airport Hilton Hotel, in West Palm Beach, Florida.

Joel McClintock competed in five World Championships, but the highlight was winning the world title in 1979 at the age of 19.

He was inducted into the Water Ski and Wakeboard Canada Hall of Fame in 2004.

Today he has carved out a career as a Broker/Agent Realtor in the West Palm Beach area.