When it comes to competitive water skiing in Canada, few names are as promi- nent as the McClintocks.

Judy McClintock-Messer’s numbers speak for themselves. She won world titles 10 years apart (1985 in tricks and 1995 in overall and tricks), broke Canadian re- cords 48 times, was on the national team for 19 years (1978-1996) and competed at every world championship during those years – an international record.

She also won 30 national crowns and claimed four Masters titles throughout her illustrious career. Incredibly, when she retired in 1996 she was only 33-years-old.

“Water skiing was a big activity in our family, spearheaded by my parents,’’ re- called McClintock-Messer, the youngest of five children and the only girl.

Three of her brothers were on the national team as well. “We were lucky enough to have competitive water skiers living close by, so we got involved in that. By the time I was nine I won my first national title. I was geared towards competition right from the start.’’

She married Perry John Messer at age 22 in 1985 and they launched a suc- cessful fitness business in Northampton, Massachusetts and started a family. That didn’t slow McClintock-Messer at all. She kept winning in water skiing, the business thrived and they had three children.

The Mississauga native, born to Dr. J.P. McClintock (D.D.S.) and Joyce McClintock, got her start in the sport as a three-year-old and began competitive waterskiing at the age of eight. Two years later she won her first gold medal, competing at the national championships, when she won gold in the junior girls tricks.

Known affectionately as Buff because of her re- semblance to Buffy in TV’s Family Affair, Judy rapid- ly progressed through all levels of competition and consistently came out on top, even in fields of com- petitors with much more age and experience.

McClintock’s first foray into international competition came at the 1977 World Championships, in Milan, Italy, when she was named an alternate on the team. She was only 13. For the next 19 years she was a member of Canada’s national team and competed in every World Championship from 1979 to 1995.

Hers was a spectacular career. She won more than 30 national titles, and is a 48-time national record-holder, including the long-held Canadian Open trick record. In the 1980s she won the prestigious U.S. Masters overall title, and three U.S. Masters trick titles. By the mid ‘80s, she was strongly established as an internation- al force. In addition to the U.S. title, she also captured many other Pan American and World medals. 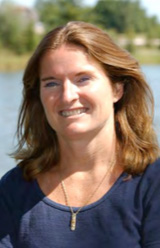 In 1985 she married Perry John Messer and the two began a fitness business, the Nautilus Fitness Centre, in Northampton, Mass. That same year, with her hands full as a part-time athlete, fulltime businesswoman and mother, she seemed to excel. Competing in Toulouse, France, she became the World Trick Champion. With new priorities in life, Judy focused on select goals.

In the early 1990s she was one of the reasons Canada became the first nation to defeat the U.S. for the World Team title in Austria after four decades of competition. They defended the title in 1993.

She competed in more World Championships than any other athlete in the sport.

But even greater things awaited this modest yet disciplined and focused athlete. On September 17, 1995 she was crowned the women’s World Overall Champion, and also captured a bronze in the tricks. It was the one lone honour that had eluded her through all her competitive years.

Prior to the Worlds she used the Canadian Nationals as a stepping stone, making a clean sweep each of the three events to defend her national overall title. After that, it was off to France for a week of training with the Canadian team to acclimatize and fine tune for the Worlds. It was a week in which her training went flawlessly. As the first day of competition began, she showed a level of confidence that even this seasoned athlete had never enjoyed.

McClintock-Messer was the only female to qualify for the finals in all three disciplines. All the years of competition and training came together on Sunday, September 17, 1995, when Judy McClintock-Messer reached the ultimate pinnacle in her sport, being crowned World Overall Champion. She was the first Canadian woman to win the title, and she became, with her brother Joel, the first brother-sister tandem to both win world titles.

Judy McClintock-Messer retired prior to the 1997 World Championships having achieved almost every honour the sport could give.

After her competitive days were over, McClintock-Messer continued to chal- lenge herself. An avid runner, she participated in several events such as the Boston Marathon.

Indeed, Joel and Judy were among the first seven inductees in Water Ski and Wakeboard Canada’s Hall of Fame. She continues to live in Northampton, Mass.