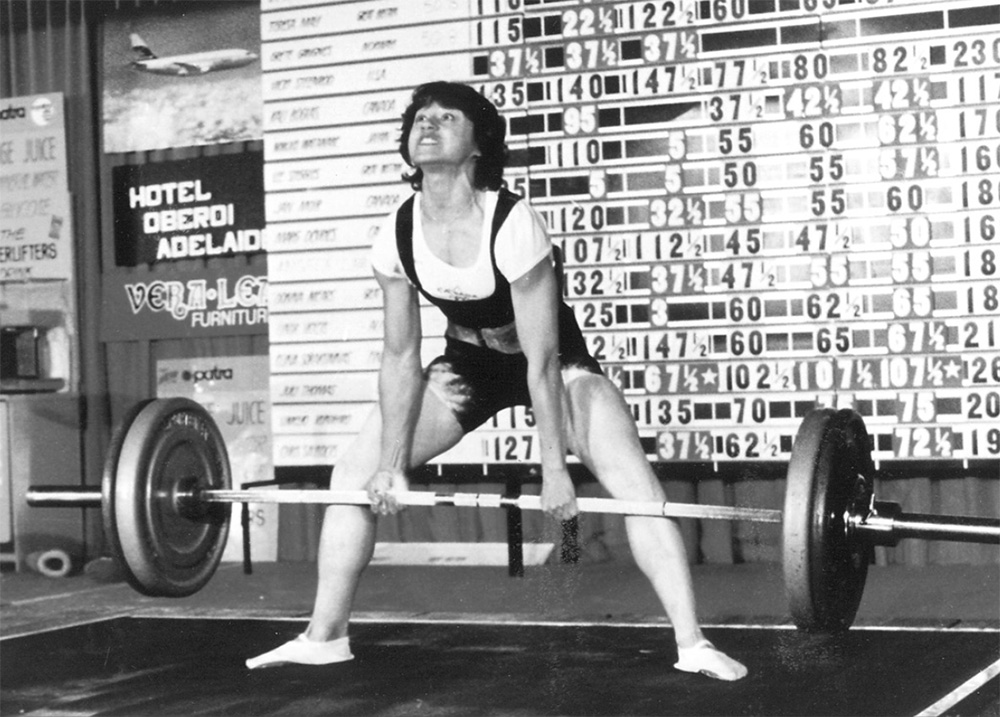 Bogias played several sports in high school – Glenview Park – in the mid-1970s, including basketball, volleyball and badminton, and during that time she trained with weights three times a week.

But she never envisioned winning a world championship in powerlifting. That soon changed once she went to Queens University, for it was during this time that she received encouragement from local powerlifter Norm MacDonald to take up the sport.

She was a success at it from the beginning, benchpressing the Canadian record her first practice. So MacDonald gave her a program to follow and, in January of 1981, in only her second competition, she won a national championship.

For the next several years she would virtually own the national title and all the divisional records of her era.

In 1984 she won her second world title, at Los Angeles, just one month before the Olympic Games began. In L.A. she bettered her old world record total and took home her second world gold medal. (She had given the first to Norm MacDonald).

In January, 1985, at Vancouver, she continued to set records, including one for the bench press (190 lbs).

Unable to compete at the worlds that year due to a thumb injury suffered while playing volleyball during a practice teaching stint, she called it quits on a distin- guished career.

She had set Canadian records as long as she competed, but despite testing negative for steroids, she saw her records, and those of all lifters who competed prior to August of 1986, cleared from the record books.

After a battle with Hodgkins Disease and the accompanying chemotherapy and radiation treatments, she made a brief comeback in December, 1989, setting three new records.

The married mother of two – son Zach came along in 1991 and Joshua a couple years later – had earlier gone back to teach at her alma mater, Glenview, in the late 1980s.

She was named Tim Turow Cambridge athlete of the year in 1982 with NHL goalie Mike Moffat, and won again in 1983 on the 10th anniversary of the Cambridge Sports Awards.

Powerlifting allowed her to see the world, gave her self-confidence and esteem. “It was the best feeling in the world,” she said, representing her country abroad and hearing the Canadian national anthem being played.