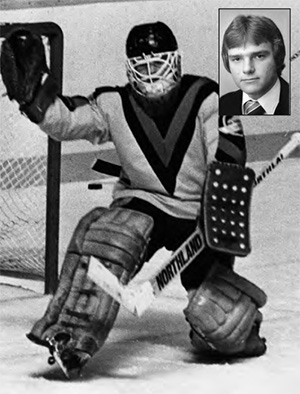 When Ken Ellacott began playing goal at an early age, he had no idea the decision would one day carry him to the NHL.

Ellacott was born in Paris, but his family moved to St. Mary’s when he was a young boy. As early as 1966, when he was seven, Ellacott was being recognized for his goaltending exploits. That year he was the top goalie in his house league.

He came to the position innocently enough. “They were short on goalies,” he recalled, and they thought that Ken might help them out. He never played a position other than goal from that point on.

He spent his formative years in St. Mary’s before moving to Hespeler at age 10, where he played on the novice all-star team. He continued to play all-star hockey as he progressed through the system until finally earning a spot on the Hespeler Shamrocks Jr. B team.

After being called up to play on the Guelph Jr. Biltmores Tier II squad, he was attending a house party at coach Ron Smith’s home when he got word that he had been selected by the Jr. A Peterborough Petes in the entry draft. He had been drafted as an 18-year-old, something that would never happen today.

“Back then there wasn’t as much hype about the draft as there is today,” he said. “I had always played for fun and I loved sports, but getting drafted was sort of a surprise.”

The next few years in Peterborough were more than he could ever have hoped for. “It’s a great city and I loved it there,” he said.
Ellacott lived with Don and Betty Marsh and completed his high school education there in 1979 after having finished Grade 12 at Galt Collegiate the year before. He was billeted with teammate Keith Crowder, who went on to play for Boston for several years.

It was a banner year in more ways than one as Ellacott backstopped the Petes, under coach Gary Green, to the Memorial Cup finals, where they lost a heartbreaker in the championship game.

It was both the highlight of his career to date, and perhaps the most disappointing moment he’d ever experienced. “We clearly had the best team but we came up flat in the final against New Westminster,” he recalled. “I didn’t feel I had played my best game.” 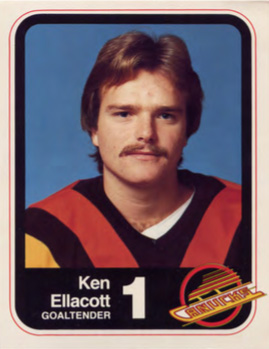 Still, Ellacott had been named Rookie Goalie of the Year and had been outstanding through the long haul of the season. He was also selected as the team MVP that year.

But he was intent on proving himself again the following season.

Which is precisely what he did as the Petes made it back to the Memorial Cup. This time they made no mistake about it, winning the title game and capturing the vaunted Memorial Cup trophy, after beating Brandon 2-1 in overtime.

Ellacott was one of the game’s stars.

“It was a great game and to be part of it makes you feel pretty good.”

Ken was selected 47th overall by the Vancouver Canucks, in the third round of the NHL entry draft, and was the first amateur goaltender taken in the draft. Two others from the WHA, which was disbanding that year, were taken ahead of him. One of them was the late Pelle Lindbergh, who would die tragically in a car crash a few years later in Philadelphia.

Again it came as a surprise for the Hespeler resident, but a welcome one, and off he went to the Canuck’s training camp at Powell River.

It was a totally new experience and very early on he noticed the difference between the pro environment and the years of amateur hockey he had grown up with. Now it was a business, and he was among the best players in the world. There was a complete business focus, with more coaches.

“It was quite an experience,” he admitted. “You don’t know what to expect. There was a little bit of intimidation to be sure. Junior hockey was the last time it was sheer pleasure and fun. Now it became a business.”

There were 21 teams in the league then, and Ellacott didn’t have as good a camp as he would have liked. He didn’t see any action in exhibition games, and was sent to the Dallas Blackhawks of the Central Hockey League, Vancouver’s top farm team.

At Dallas he got his chance to shine, and was the team’s top goalie. But Dallas missed the playoffs that year, though Ellacott’s season was extended when he was called up to be back-up goalie for one of Vancouver’s playoff games.

But the Canucks were eliminated in the first round that year.

“Next year at Dallas we had a great team,” he said. “We won the Sawchuck Trophy for having the best goals-against.”

That year Dallas lost out in the semi-finals, but they lasted longer than their parent club and so Ellacott didn’t get an opportunity to move up for the playoffs.

In 1982-83 Ellacott finally stuck with the Canucks, though his role was as backup goalie, something he had never done before. He was used to playing most of his team’s games. Now he was idle more than he was playing.

“I didn’t adapt to that well,” he said. “It was very difficult.”

The next year – it would be his fifth and final season of professional hockey – he spent in the CHL at Billings, Montana. Billings was an independent team, and he could see the writing on the wall. “I was finishing my second contract with Vancouver and they had no intention of re-signing me.”

All-in-all, it was a disappointing year (1983-84) at Billings. “We didn’t have a great team environment and we failed to make the playoffs.”

There were no concrete offers waiting for Ellacott at the end of the season, and though he could have gone to the International Hockey League, he made the decision to call it a career. “I was 25, my father had passed away that summer and I hadn’t had much success in the

NHL to that point.” It seemed like the right time to hang up his skates. “After five years of pro hockey, I wasn’t upset or overly disappointed at all,” he said.

Besides, he wanted to concentrate on his family and settle down. So he returned to Cambridge in 1984 and played a couple of years in Senior hockey (Flamborough and Brantford), where the game was played for fun. “It was fun again, though it was tough working all day and then playing hockey at night. But it was a good bunch of guys.”

In his first year they lost to Dundas in the finals, but won the league title in the second year before losing in the semis to Cornerbrook in seven games.

With family responsibilities and other priorities taking over, he ended his competitive career, though he continued to play Sunday nights for six more years in the KW Shop League. “I don’t miss it,” he said. “I’ve had my fill. You can only go so many years having pucks fired at you.”

Besides, he had been instrumental in helping his junior team win one of hockey’s most coveted trophies – the Memorial Cup.

“That was the highlight of my hockey career,” said Ellacott. Today he is the father of three daughters and where once his athletic passion was hockey, it is now golf.