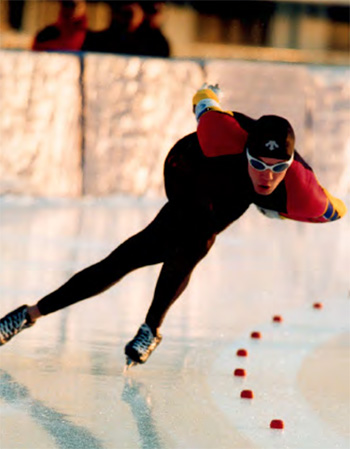 Of all the images Canadians saw during the first week of the Nagano Olympics in February of 1998, none were as resound- ingly upbeat as the smiling face of long track speed skater Kevin Overland.

Overland, one of three Cambridge Speed Skating products at the Nagano Games – sister Cindy, a long tracker, and good friend Derrick Campbell, a short tracker, were the others – was considered a bronze medal favorite in the 1,500 metres by Sports Illustrated magazine.

Overland, who considered his best distance to be the 1,000 metres, had set a world record two years earlier. But in the early winter of 1997, not long before Nagano, he had skated a new world record in the 1,500 metres in his first serious try at that distance.

Coached by the famed Jack Walters, who had coached Gaetan Boucher to Olympic gold in 1984, Overland suffered a serious groin injury at the Canadian Olympic Trials in December, 1997.

The injury jeopardized his dreams of going to the Olympics, a concern that was magnified given that he was trying to secure a spot on perhaps Canada’s strongest-ever men’s long track team.

But Overland qualified for both the 500 metres and the 1000 metres at the second and final weekend of the trials, and then hung up his skates to recuperate.

The timing of the injury was a major disappointment to the young skater, who, four years earlier had been denied a chance to compete at the Lillehammer Games after being injured in a car accident on the eve of the Olympic Trials.

But Overland refused to let it get him down. Instead, he focused on the positive, and did everything he could to recover in time for Nagano.

His first race at the Olympics was the 500 metres, and Canadians everywhere got up in the wee hours of the morning to watch the action live from Japan. Overland didn’t disap- point, bettering the newly-set Olympic record held by Casey Fitzrandolph. “Heading back on the bus to the village it was a bit of a long night,” said Overland, “but I didn’t lose any sleep.” He was ready for the second of two 500-metre races which would determine the medals. 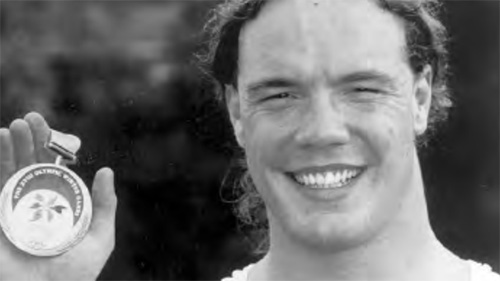 He was anticipating the next day’s race, wondering “Am I going to blow it or am I going to do it?”

That second race showed what kind of stuff Overland was made of. Despite a bad slip on the back stretch, his sense of calm, his winning mindset, saw him through to a bronze medal. Had it not been for that slip, his bronze might very well have been gold.

“I probably lost the silver right there,” he later said. “But that’s speed skating.”

In the end, no Canadian medal winner looked prouder, or happier, than Kevin Overland did on the podium.

“There you go Kev,” said coach Walters after the final race. “There’s your medal.”

Looking up into the stands, he saw his father, Ernie cheering loudly.

The Olympian raised his fist, then put his thumbs up. That said the world.

Overland went on to a highly successful coaching career in Canada and South Korea.