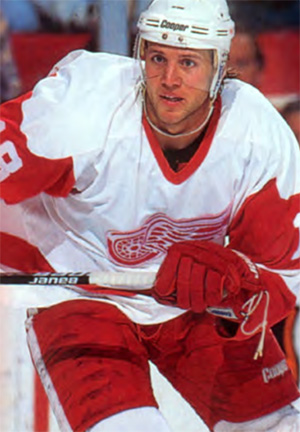 In the late 1990s, Cambridge’s Kirk Maltby matured into one of the mainstays on a high-powered Detroit Red Wing squad.

A mucker with unbelievable lower-body strength, Maltby was at home in the corners and along the boards and relished in delivering big, booming bodychecks that could change the momen- tum of a game.

He played mainly on Detroit’s famed Grind Line, where his defensive skills were used to their maximum benefit.

A household name in the Motor City, the former Cambridge Winter Hawk star was named to the Canadian squad that was to compete in the World Cup of Hockey in the fall of 2004.

It shouldn’t have come as a complete surprise, as many knowledgeable hockey people had long sung his praises, including Detroit captain Steve Yzerman and former coach Scotty Bowman, both of whom singled out Maltby in Detroit’s Stanley Cup wins in the 1990s.

Even Red Wing great Ted Lindsay praised Maltby’s consistent hard work and credited him with being one of the reasons Detroit was an NHL powerhouse in the late 1990s through 2004. 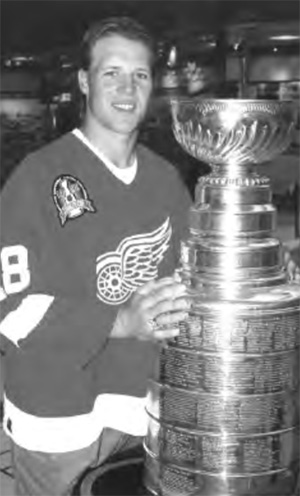 In his final season with the Platers, Maltby was team captain and scored a career-best 50 goals and 41 assists, no small feat in Canada’s premiere junior league.

Maltby was drafted in the third round (65th over-all) in the 1992 NHL entry draft by the Edmonton Oilers, and played in the AHL with the Cape Breton Oilers in 1992-93, where he scored 22 goals and 23assists, helping the team capture the Calder Cup.

The following year (1993-94) he began his NHL career with the Oilers, and remained in Edmonton through most of the 1995-96 season. He scored his first NHL goal in his debut game against the Islanders on 10/8/93. But after a couple seasons in post-Gretzky Edmonton, his career in Alberta came to a close after 164 games (21 goals, 17 assists) when, on March 20,1996, he was traded to the Detroit Red Wings for Dan McGillis. There, he played six regular seasonand eight playoff games. In 1996-97, he played 66 games for the Red Wings, winning his first Stanley Cup. That spring he brought the Cup home to Cambridge, and there was a large reception and parade in Hespeler. The hometown hero had helped Detroit win its first Cup in many years. Interestingly, another Cambridge native, Carl Liscombe, had helped Detroit win a Cup nearly a half-century earlier (1943). Liscombe was in the stands at Detroit when Maltby won his first Cup. The following season Maltby won his second Stanley Cup after scoring career-highs in goals 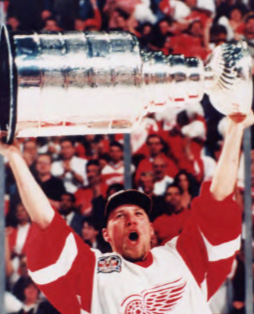 (14)assists (9), and points (23). His 14 goals included two power-play goals, one short-handed, and three game-winners. In 53 games in 1998-99, he scored eight goals and added six assists. During the 1999-2000 season he scored six goals and eight assists in 41 games. He also played in his 400th NHL game on 10/17/2000. In 2001-2002 Maltby and the Red Wings captured their third Stanley Cup in five years. In 2003 Maltby was a key member of the national team, which won the World Championship in Turku Finland.
Maltby enjoyed softball in the off-season – he played Junior baseball for the Cambridge Bulldogs – and maintains a home in Cambridge.

Maltby retired on October 12, 2010. The same day he also announced he was taking a job as a pro scout with the Detroit Red Wings.