Cambridge’s Kurtis MacGillivary moved into some fast company when he went to Queensland, Australia to train with one of the top swimming programs in the world.

Within two years of his move he had broken the oldest Canadian men’s long-course swim record in the books at the Australian Olympic swimming trials in Sydney.

MacGillivary beat the standard for selection to the Canadian Olympic team for the 2004 Athens Olympics when he posted the fastest time in the men’s 1,500-metre freestyle heats, clocking 15 minutes 11.38 seconds, which lowered the previous national mark of 15:12.63 set by Harry Taylor of Edmonton in January, 1990. The Olympic standard was 15:12.70.

His success in the pools Down Under helped fuel his hope of one day competing in the Olympics.

MacGillivary finished ahead of world-record holder Grant Hackett of Australia, who qualified second for the final in 15:23.05.

MacGillivary had been something of a swimming phenom in Cambridge, but he fit in well with the Australian swimmers and he befriended and trained with Hackett, learned to surf and drive, and more importantly, he learned to win against top competition.

Always a talented age-group swimmer back in Canada, in Australia he advanced rapidly through the international ranks. He smashed his short course (25-metre pool) personal best for the 1,500-metre freestyle by 30 seconds and with big kickoffs on the extra turns, he swam 14:50.94, breaking the 1992 mark of Vancouver’s Turlough O’Hare by almost two seconds.

But despite the records, MacGillivary was noticeably absent from the 2004 Olympic team, and despite appeals, was never named to the team.

However, MacGillivary, 19, did surpass the standard when he swam a Canadian- record 15:11.38 in the event at the Australian Olympic trials in April, 2004. 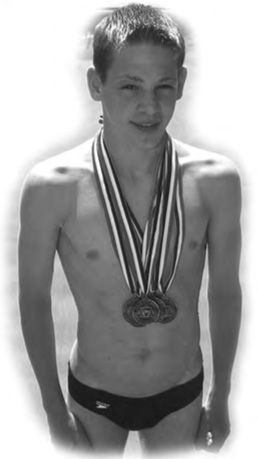 More than a few observers from Canada’s swimming ranks thought the decision by Swim Canada was not fair. MacGillivary believed he had earned a spot on the Olympic team, and popular sentiment was with him. He was ranked 13th in the world, but arbitrator Ed Ratushny, Q.C., upheld the decision by Swimming/Natation Canada, and MacGillivary was denied a spot on the Athens team. It was a heartbreaking moment for the young swimmer. For years a large Canadian flag had hung on his wall and he had stared at the flag each night before he went to sleep, dreaming of representing Canada at the Olympics.

While he was recognized for the record, his time was not set at one of the meets that Swim Canada decided would determine the country’s Olympic team. Only times from the 2004 trials and the 2003 worlds in Barcelona were eligible.

MacGillivary’s coach, Dean Boles, maintained that the Australian meet should have been included because not only was it sanctioned by FINA, the world governing body for swimming, it was in fact a better reflection of a swim- mer’s ability because it was closer to the Games.

“The Barcelona meet provided a cushion for a number of swimmers and they didn’t follow that up at the trials (last week),” Boles said. “Kurtis did a time that was closer to the Olympics and he didn’t have a cushion.”

The COC’s qualifying standard of a top-12 in the world – based on performances in 2000 – proved to be a sore spot among many Canadian athletes in a variety of sports. The COC toughened the standard from the top-16 performance that was required for the 2000 Olympics in Sydney.

“If the COC’s intention is to have the best athletes on the team, then it only enhances the Canadian team to have Kurtis on it,” Boles said at the time.

A year earlier, at the 2003 Canadian world trials in Victoria, however, the real story was perhaps that of distance freestylers including MacGillivary, who had broken the 800-metre freestyle Canadian record. Kurtis, by then, was a training partner of Grant Hackett and Stephen Penfold down on Australia’s Gold Coast, where they were all coached by Denis Cotterell. Rick Say swam the 800 free in the heats 8:00.26 and was two tenths off the Canadian record before MacGillivary smashed it in the final, becoming the first Canadian man under 8 minutes with his 7:58.63. (An almost 13-second drop). MacGillivary then kept the crowd on its feet again with his personal best 1500 free(15:19.69), an 18 second drop off his best time. Said MacGillivary: “I can’t believe it, I can’t believe I’m a Canadian record holder.” He complimented the fans for his win. “I saw the crowd going crazy and I thought I was going an 8:05, it was just crazy.”

MacGillivary closed out his competitive career in the NCAA for Drury College (Division II) and now coaches with the Fort McMurray, Alta., Swim Club.