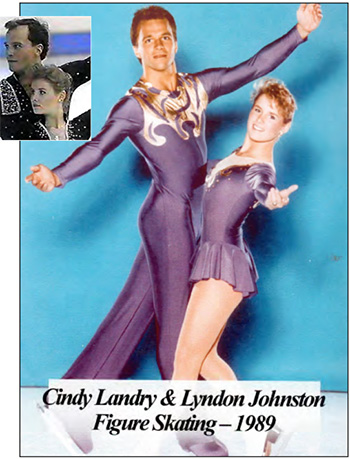 Cindy Landry (born 1972) was one half of the well-known Canadian figure skating pairs team of Landry and Johnston, and for a time, they were one of the top pairs teams in the world.

After winning the Canadian title in pairs in 1990 she placed 9th with Johnston at the 1990 World Figure Skating Championships in Halifax, after which they both turned professional.

Lyndon Johnston (born December 4, 1961 in Hamiota, Manitoba) was a pairs skater who eventually came east to train with Kerry Leitch at the Preston Figure Skating Club, just as Landry, a native of Pincourt, Quebec, had gone west to Preston. Johnston came to Preston as a 15-year-old, and almost a dozen years later he and Landry were the second best pairs team in the world; he was 28 and a two-time Olympian, while Landry was 17. They had only been paired together for one and a half years.

Initially Johnston was paired with partner Melinda Kunhegyi from 1981 to 1985, and together they achieved some impressive results, winning silver at the 1984 and 1985 Canadian championships. They also competed in the 1984 Winter Olympics in Sarajevo, where they finished 12th. That year they also won a bronze medal at the Skate America competition.

In 1985 they finished fifth at the World Championships in Tokyo.

Following that partnership, Johnston competed with Denise Benning the next three years. They won two national silver medals and a bronze medal and capped off their career together by competing at the 1988 Calgary Winter Olympics.

After the 1988 Olympics, Johnston teamed up with Cindy Landry. He and Landry won the silver medal at the 1989 World Figure Skating Championships in Paris, and won the 1990 Canadian national title, following their clubmates Katherina Matousek and Lloyd Eisler, who were third at the 1985 Worlds, and Cynthia Coull and

Mark Rowsom, who were third at the 1986 Worlds in Geneva. All were coached by Leitch in Cambridge.

Eisler, with new partner Isabelle Brasseur, would go on to win the world title in Prague in 1993, but by then, Eisler had left Preston.

Landry and Johnston’s silver medal at the Worlds was the single best performance by a Cambridge-based pairs team ever. And it was also the fulfillment of a long-held dream to stand on a world podium. He was 27 years old. Said Johnston: “Good things come to those who wait.”

The only pairs team to better their performance was the gold medal-winning effort of Olympic champions Ekaterina Gordeeva and Sergei Grinkov who won their third world pairs title in four years.

“She’s very talented,” said Johnston of Landry. Johnston attended Preston High School. “I’ve been through some of the mistakes and I’ve tried to guide Cindy down the right track.”

Gordeeva, at 17, was the same age as Landry. Johnston and Landry’s medal was Canada’s best showing in the event since 1984 when Barbara Underhill and Paul martini won the world title in Ottawa.

Coach Leitch said the Soviet pair had invaluable experience. “The Soviets had a couple of more difficult side-by-side jumps than we did, and they show the experience that we don’t have yet.”

The Preston club had a long string of world-class contenders, having sent club members to the world championships every year since 1974.

Landry and Johnston also finished second at the Skate Canada International in 1990. After winning the Canadian title in pairs in 1990 Landry and Johnston placed 9th at the 1990 World Figure Skating Championships after which they turned professional.

Johnston’s career was impressive, and included appearances at two Olympic Games (1984 and 1988), six World Championships, and culmi- nated with a silver medal at the 1989 World Championships. During that time, he established himself as the best male pairs skater in the world along with partners Kunhegyi, Denise Benning and Cindy Landry.

A three-time finalist for Manitoba Male Athlete of the Year, Johnston had a 17 year skating career, begun in 1973. Along the way, he won 25 med- als, 12 trophies, 13 Silver Cups in pre-nationals competition, 18 medals at National Championships and 15 international medals: seven gold, six silver and two bronze.

With his various partners, Johnston competed in 17 different European and North American cities and also did exhibitions with the ‘World and Olympic Team’ in 1988 and 1989 in 30 cities in Europe and another 25 in North America, and the 1990 World tour which performed in another 30 U.S. cities.

Johnston was inducted into the Manitoba Sports Hall of Fame and Museum in 1993.

Landry settled into Las Vegas where she continued to skate professionally.