Alexander “Lex” Chisholm was one of this city’s top hockey players in the first half of the 20th century.

A Galt native, he was a contempo- rary of another Galt player, Carl Liscombe – the two were born a month apart and were in the same class at school.

And like Liscombe, Chisholm would go on to play in the NHL.

Chisholm first played junior hockey for the Galt Terrier Pups from 1932 to 1934, where he scored 25 goals in 30 games, and also collected 15 assists.

He then spent the next four seasons playing with the Oshawa Generals Senior team.

In his last season there Chisholm not only led the Ontario Hockey Association’s Sr. division in assists and points, but the center/right winger also spent three games with the Syracuse Stars of the American Hockey League.

He played one more season with the Leafs, earning $2,105, but by then, war had intervened. 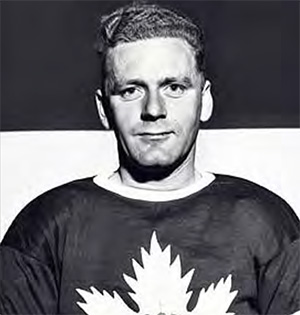 Chisholm played two games with the Pittsburgh Hornets of the AHL to start the 1940-41 season, but he was by then scheduled to enter the service.

In 1941-42, the year his teammates on the Leafs were winning the Stanley Cup, Chisholm was stationed in Halifax, and the following year was in Toronto with the OHL Senior entrant that year, the Toronto Army Daggers.

Like many other players, when the war ended, Chisholm’s best hockey years were behind him and he never played another game in the NHL.